The only good thing about Probopass is its glorious moustache. 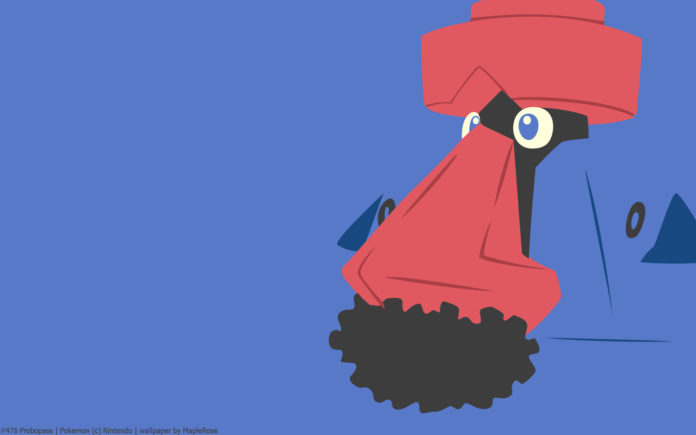 Pokémon GO Probopass is a Rock and Steel type Pokémon originally discovered in the Sinnoh region. Probopass has a Max CP of 1863, and its base stats for ATK, DEF and STA are 135, 278 and 120 respectively. This guide will be useful to see its potential use and place in the metagame.

Porbopass will probably require 50 candies to evolve, but it is still too early to tell whether or not that will be the only requirement. It evolves from Nosepass, introduced in Generation 3, when leveled up in areas with a special magnetic field.

Probopass shares the same typing as Aggron, a Generation 3 Pokémon with a higher CP and better stats overall.

Its type combination is probably one of the worst ones for defensive purposes due to several reasons. Normal type Pokémon such as Blissey, Snorlax, Slaking or Chansey are commonly used as gym defenders, due to the fact that they are quite bulky and are only weak to Fighting type moves. Probopass, as a Rock and Steel type, has a double weakness against Fighting type moves, which makes it easier for attackers who use Machamps to wreck gyms. Furthermore, Probopass’ stamina stat is not very high, and even though it has a good defense stat, it will probably not have enough bulk to stand out as a great gym defender.

Probopass’ attack stat is very low too, which will probably make it a bad choice for offensive purposes. Moreover, Steel and Rock type attackers are not very useful in the current metagame, and there are plenty of better options that would serve the purpose better than Probopass.

In this chart, we will look at its viability as a Steel and Rock type Pokémon and how it sizes up to some of the other popular Pokémon with a similar typing in the game (Aggron is the only one with the same exact typing).

As it can be seen in the Table above, Probopass has an attack stat miles behind its competitors. There are several other Pokémon with greater bulk too, which makes Probopass more of a dex filler rather than a useful Pokémon in the current metagame.

Even though it is not possible to know for certain what moves Probopass will have when it is released, we can take a look at the moves that it is able to learn in the main series games, as well as the moves its previous evolution already has access to, in order to compile a list of possible movesets for it:

Probopass needs to watch out for Cloudy weather as its main weakness, Fighting type moves, are even more dangerous when boosted.

The chart below will help you visualize what weather is beneficial or harmful for Probopass.

Shiny Probopass will probably not be available as soon as the regular form is released, as shiny Nosepass is not yet available in the game. Its body color is the main element that changes, as it switches from blue to gold. A sprite comparison can be found in the Table below.

Probopass’ Pokédex entries from various games are quite interesting. Here are a couple of them:

Probopass evolves from Nosepass when leveled up in areas with a special magnetic field, but it is still unclear how Niantic will implement that in the game. Thus, we will have to wait and see.