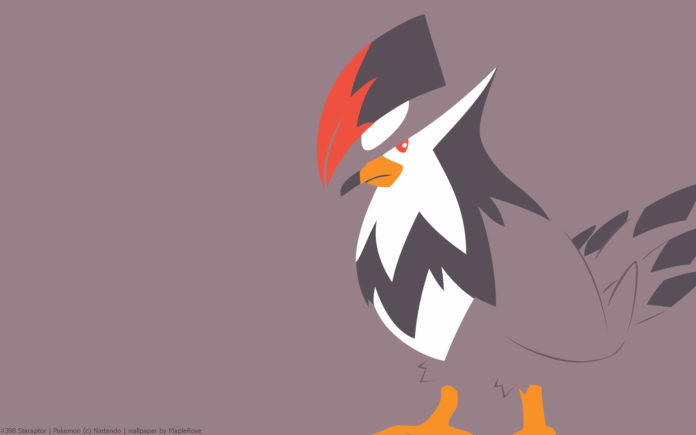 Staraptor has a max CP of 2675, with an ATK of 234, DEF of 145, and STA of 170. Although it probably won’t be incredible by any means, its stats are surprisingly good compared to those of its feathered counterparts from previous generations: Pidgeot, Swellow and Noctowl.

Staraptor in the Meta

This chart will compare Staraptor’s stats to those of other prominent Flying types, as Normal types aren’t good for much in an attacking role. Note that only Pokémon able to learn Flying moves are listed in the table; thus Salamence, Gyarados, and the Legendary Birds of Kanto are excluded.

Overall, Staraptor isn’t anything special compared to other Flying types. In the main series games, it shone thanks to its great Attack and Speed stats, as well as its access to the coveted move Close Combat. Unfortunately, in Pokémon GO, it simply won’t be a top-tier Flying attacker.

First off, Rayquaza’s attack stat is miles higher than Staraptor’s, and it is the only Pokémon of the above list with a (confirmed/currently available) double Flying moveset. As Speed is not directly implemented in Pokémon GO (it is instead factored into the Pokémon’s ATK stat), Staraptor can’t take advantage of that strength either. Close Combat Fighting does not benefit from STAB, and the battling scene in Pokémon GO is centered around having specialized attackers to counter specific types, so Staraptor will not see much use in that department either. No wonder Staraptor has an edgy hairdo and unimpressed expression — although it far outstrips other regional birds, it will see limited use in the Pokémon GO meta.

Despite this, its attack stat is still quite good. Starly are expected to be very common, so Staraptor may be a discount choice of a Flying glass cannon to be used against Fighting, Bug, or Grass type Raid Bosses such as Machamp and Exeggutor.

Staraptor will take super-effective damage from Rock, Electric and Ice moves, while resisting Bug and Grass and being immune to Ghost and Ground.

Based on its main series movepool, here are some potential moves for Staraptor:

The following chart will help you visualize what weather conditions are helpful or harmful when battling or raiding with Staraptor.

Shiny Staraptor is pretty cool! Like its pre-evolutions, its shiny variant looks similar to its original coloration but sports a richer brown color and a blue tip to its crest of feathers rather than red.

Known as the “Predator Pokémon,” Staraptor diverges from its pre-evolutions’ starling-like designs and instead appears to be a large bird of prey.

StaraptorStaraptor is a surprisingly good Flying typed coming in Gen IV, and it finally brings a usable Flying type that's not also a Dragon. We look forward to raiding Machamp and Venusaur with an army of easily-obtainable high level Staraptors.