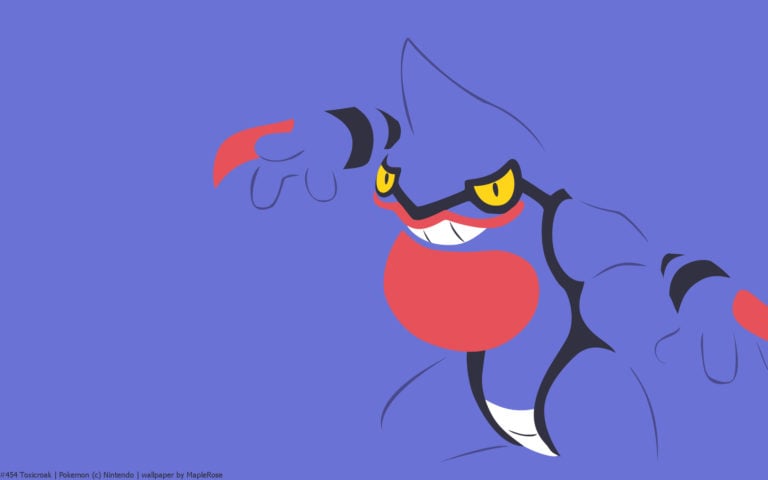 Pokémon GO Toxicroak, a toxic mouth Pokémon, is a dual type Fighting and Poison. It is a second stage evolution that evolves from Croagunk. Toxicroak maxes out at 2488 CP with 211 ATK, 133 DEF and 195 STA. How does Toxicroak compare to Machamp, Muk or others?

We’ll go in depth in this article, but right now it is fitting the same role as Breloom: high DPS, low sustainability Fighting type attacker. You likely have better Pokemon at your disposal right now, but let’s see how does it stack up regardless.

Toxicroak in the Meta

Toxicroak takes super-effective damage from Ground and Flying types. Its supreme counter is Psychic type which deals 1,96x damage. On the other hand, it double resists (0,51x) Bug type and takes reduced damage from Rock, Grass and Fighting.

After Generation 4 is fully introduced, Machamp will still likely remain on the top followed by Hariyama, but how does the relatively squishy Toxi fit into that equation? After all, combination of great stats with Counter/Dynamic Punch move set is what currently defines a good Fighting type, and as we will see later on, Toxicroak has access to the same move set.

In this chart, we will look at Toxicroak viability as a Fighting type in comparison with other popular available options.

Fighting type is extremely useful in the metagame, especially against top tier defenders and Toxicroak looks pretty weak on paper.

On the other hand, there is not much of a competition between Poison types. Let’s take a look at the best Poison Pokémon.

We’re all very well aware that Poison isn’t particularly useful type in Pokémon GO. Toxicroak, with the right moveset, should become a high DPS glass cannon. It could be somewhat viable in the future against Fairy type, but currently available Steel type Pokémon do better. And let’s not ignore that Roserade is there as well with its monstrous attack stat, most likely outclassing Toxicroak right away.

Toxicroak’s moves are varied, focusing on the dirt fighter lore that Toxi is based upon. Fast move selection is solid, with Counter and PJ offering good coverage for both types, and charge moves are solid as well.

Of course, you’d probably want to stay away from Mud Bomb, as it lacks STAB and it Toxicroak isn’t really the Pokemon you want to use when you need a strong Ground type (go for Groudon or Garchomp, or for anything other that can replace Ground).

So it’s down to two move sets:

And how are the sims looking? Well… in our simulations, Toxicroak usually ranks around fourth or fifth place as a Fighting type, following the usual suspects – Machamp, Hariyama, FB Mewtwo, Heracross – and contesting with Breloom. Mind you, these rankings are temporary as Gen 1 – 3 Pokemon still don’t have the CP rebalance activated. As a Poison type, its outclassed by Roserade and Gengar in almost every match-up and we really wouldn’t recommend using it that way.

You definitely don’t want to use Toxicroak against Pokémon with access to Psychic moves in Windy weather. As a matter of fact, any boosted super-effective move will tear through it because of its low HP and DEF. It performs the best in Cloudy weather.

The chart below will help you visualize what weather is beneficial or harmful for Toxicroak.

Toxicroak’s description is always focused on its poisonous part.