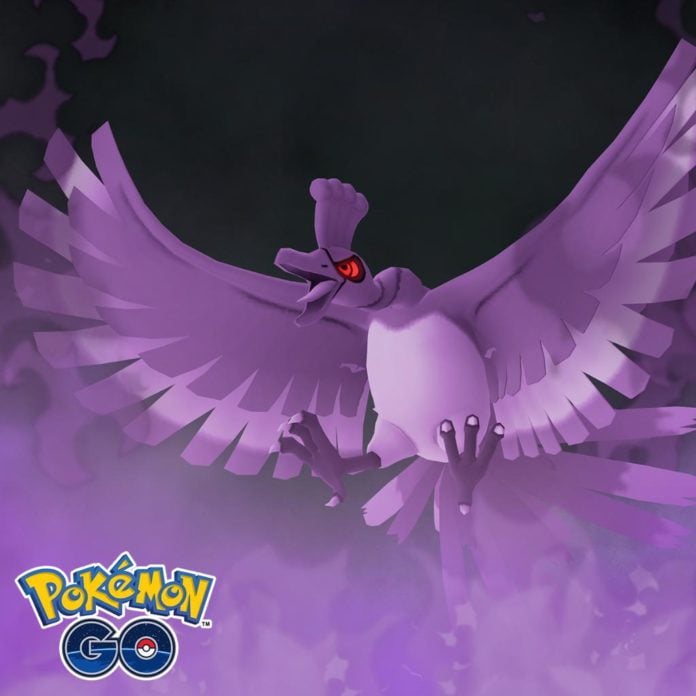 A Seven-Colored Shadow is a new Team GO Rocket Special Research that leads to discovering Shadow Ho-Oh. In order to obtain a Shadow Ho-Oh, you will need use a Super Rocket Radar to find and defeat Giovanni.

A Seven-Colored Shadow is available from from June 17, 2021 to September 1, 2021 and Giovanni will control a Shadow Ho-Oh during that period.

A Seven-Colored Shadow Tasks and Rewards

The new #TeamGORocket special research with #ShadowHoOh will be available for you once it is June 17 for you in your timezone 📅 #PokemonGO pic.twitter.com/XdWW1T0mMb

Hey there, %PLAYERNAME%. Have you looked up at the sky lately? I thought I’d been staring at reports for too long, but no, there are rainbows everywhere!

That’s not all—I’ve also heard rumors that a mysterious Pokémon has been sighted wherever these rainbows appear. They say rainbows bring good luck, so why not follow one to the end? Haha!

In all seriousness, why don’t you go for a stroll and see for yourself? You never know what we might find!

Keep your eye on the sky, and good luck!

Welcome back, %PLAYERNAME%. I’m afraid I have some dire news… It sounds like Team GO Rocket’s gotten wind of these sightings and have set out to catch the mysterious Pokémon for themselves.

Perhaps they’re looking for a bit of good luck as well! Haha! Well, whatever their motive, we can’t have them creating more powerful Shadow Pokémon. It’s time to do some investigating.

Knowing how large Team GO Rocket’s forces are, I fear they may have already found it, no doubt leaving Shadow Pokémon in their wake. Let’s go catch some Shadow Pokémon and see where they lead us!

Great job rescuing all those Shadow Pokémon, %PLAYERNAME%! I wish we had time to celebrate, but I just discovered that Team GO Rocket caught up to our mysterious Pokémon…

…and that it’s none other than Ho-Oh, the Rainbow Pokémon! But don’t be discouraged! I truly believe that with enough determination, we can save it, just as we have in the past.

Let’s prep for the gauntlet of battles ahead and gather more information about Ho-Oh’s whereabouts by pursuing more Shadow Pokémon.

Great job saving even more Shadow Pokémon, %PLAYERNAME%! Through your efforts, we’ve learned that Ho-Oh has been handed off to Giovanni and made into a Shadow Pokémon.

For now, I want you to find and defeat Arlo, Cliff, and Sierra! Doing so will help us build a Super Rocket Radar that’ll lead us right to Giovanni…and to Ho-Oh! Good luck!

Incredible work, %PLAYERNAME%! With a Super Rocket Radar in hand, we’ll have no problem finding Giovanni. Defeating him in battle, however, is another story entirely…

Still! Seeing how you were able to beat his underlings, I’m certain you’ll come out on top—and save Ho-Oh to boot!

What a magnificent battle, %PLAYERNAME%! Congrats on defeating Giovanni and saving Ho-Oh from his clutches.

Team GO Rocket never rests, so we should continue to be vigilant. In the meantime, why not get to know your newly saved Ho-Oh?

With the right care and a little luck, any Shadow Pokémon can be purified! I wish you the best, %PLAYERNAME%, and I’ll see you next time!