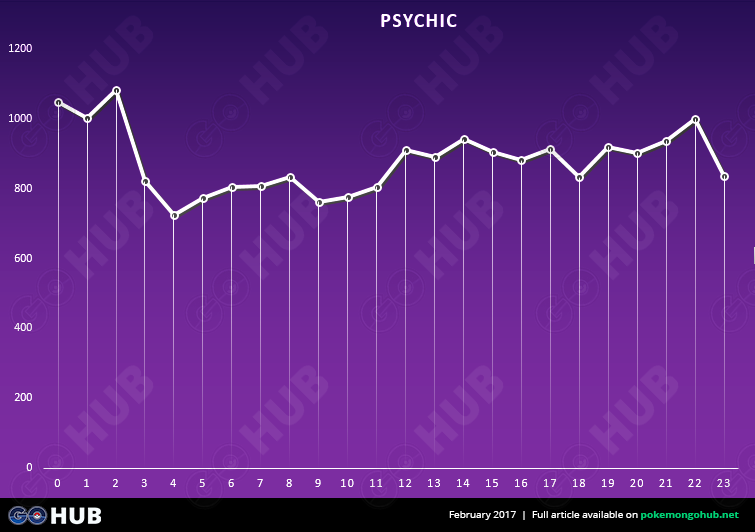 After receiving several reports of anecdotal evidence that Dark Pokemon spawn more during the evening hours of the day, we went on to investigate. Our goal was to answer the following questions:

This is the first installment in our analysis of a data set that contains 1.8 million spawns recorded from February 18 to February 22. You can download the data set and analyse it on your own here.

For this research we’ve used a CSV file provided by a reddit user that manages a private tracker. For obvious reasons, we are not publishing the name of our source, but the entire data set is available on Github for results verification and reproduction.

In order to create these results we’ve used SQL queries, mostly pretty standard stuff: CTEs, GROUP BY, ORDER BY and LEFT JOIN. The data set is organised into three tables:

The spawns were aggregated by the hour (hh portion of DateTime) when they occurred. All times in the database are recorded as local server time.

The data in the data set is not normalized. This means that recorded values per hour depend on number of pings during that period. The provider of the data set did not specify if pings are organic from users or from automated bots. Thanks to j16sdiz for highlighting the problem on GitHub. We are investigating the issue and will update results here as soon as possible.

After analyzing and verifying the results, we were able to provide answers to all initial questions, with some rather surprising discoveries, especially in terms of popular

Is there any correlation between particular Pokemon Type spawns and time of day?

Yes, there is! According to our research, Pokemon Types fall into various “spawn patterns” in regards to “time of day”.

We’ve observed two curious phenomena, both which could be due to method of recording the spawns and are still a mystery:

How does the game use local time and does it use it for spawns?

As data suggests, the game servers use local time to generate spawns.

Niantic’s server side orchestrates the spawns in regards to current local time in the players area. The in-app day and night cycle is cosmetic only and has no correlation to actual world spawns and encounters.