Most Raid Boss counter lists assume that you have maxed out versions of each Pokémon on it, but in reality, very few people do. With a Heat Map, however, you can identify whether, for example, your level 35 Pokémon will do more damage to a Raid Boss, than your level 40 Pokémon, due to it having a better and more effective moveset.

There are several different methods for ranking Raid Boss counters, but the one we’ve selected to use is TTW, which stands for ‘time to win’. Basically, this tells you which Pokémon would potentially beat the Raid Boss in the shortest amount of time because if you’re short of Trainers and are trying to beat the clock, this will give you the best chance of doing so. Not only that, but doing more damage can mean more Premier Balls with which to try and catch the Raid Boss!

So, to supplement our Palkia Raid Guide here’s the Heat Map that we’ve made for the latest Legendary Raid Boss, which comes to Tier 5 Raids starting Tuesday, January 29th at 1 pm PST. We’ll explain how to read and use the Heat Map to get the most out of your Raid squads: 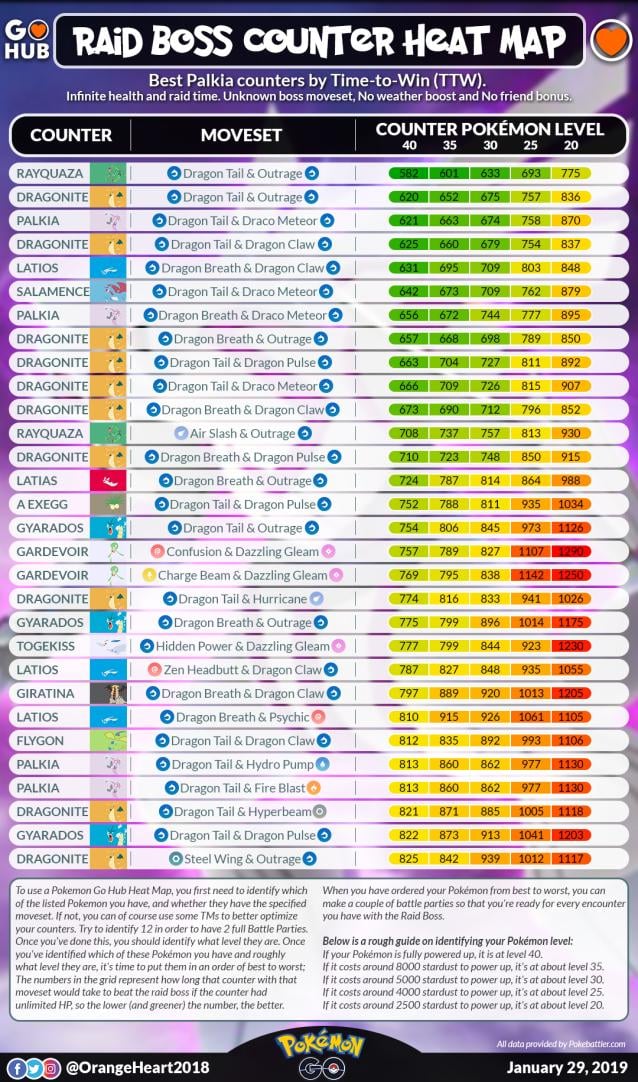 (Shout outs go to Pokebattler.com for the data, Redditor u/Rayunge for his guidance in compiling the data, and GoHub Artist OrangeHeart for creating the info-graphic)

*This data assumes that you don’t know the moveset of the Raid Boss, that no moves will be weather boosted, and that you aren’t getting a friend damage bonus, so basically, almost the worst case scenarios – unless the weather boosts the Raid Boss’ moves, things can only get easier.

As detailed at the bottom of the graphic, to use a Pokémon Go Hub Heat Map, you first need to identify which of the listed Pokémon you have, whether they have the specified moveset (If not, you can of course use some TMs) and what level they’re at. As a rough guide:

Once you know which of these Pokémon you have and roughly what level they are, it’s time to put them in an order of best to worst; The numbers in the grid represent how long that counter, at that level, with that moveset would take to beat the raid boss if the counter had unlimited HP. So the lower (and greener) the number, the better.

Best of luck in your battles with Palkia, and if you have any feedback, suggestions or changes you’d like to see in our future Raid Boss Heat Maps, please Tweet @GoHubQoncept or join us on the GoHub Discord and tag @Qoncept with your comments.