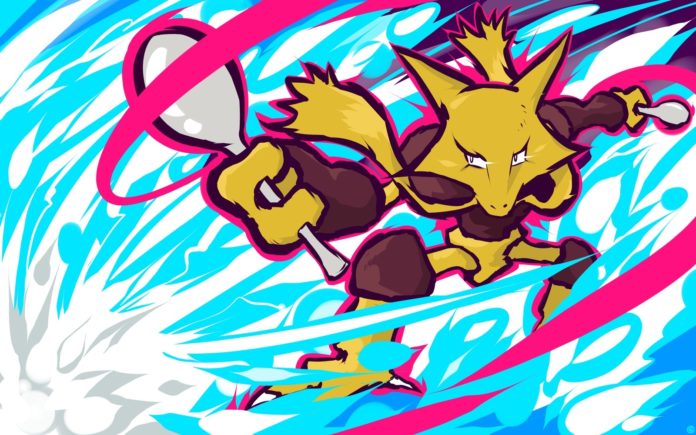 When there were only 150 Pokémon in the world (umm, Kanto), it goes without saying that the Psychic typing was the most dominant type back then.

After all, we had the most powerful Pokémon, Mewtwo, as a Psychic type. Even the most difficult gym leader from Kanto was arguably Sabrina, the Psychic type expert.

This mind-bending type was so dominant that Gen 2 introduced a new typing altogether to balance out the meta, the Dark type.

While the Dark type did decelerate Psychic, 6 more generations of Pokémon have been introduced since then.

Mewtwo is still one of the most powerful Pokémon ever, regardless of whether it’s the main series games, Smogon VGC and Showdown, or Pokémon Go.

Not to mention, there are several legendary and mythical Pokémon who are Psychic types.

The Psychic types are still a force to be reckoned with and have a dominant presence in Pokémon Go.

The likes of Mewtwo and its two mega evolutions are arguably the most powerful Pokémon in the game. The future of the game has exceptional additions to the meta such as Ultra Necrozma and Tapu Lele but… I have been talking about legendaries only.

Barring Mewtwo, Alakazam is the poster Pokémon of the Psychic types and is one of the most powerful Pokémon in general.

This 5000 IQ pocket monster has had an impressive showing till now and has even gone on to receive a Community Day of its own.

But the most exciting aspect of Alakazam is its yogic mega evolution. And let me tell you right away that this is one mega evolution that you should absolutely look forward to!

More on that later though.

Alakazam is an offensive beast and an exemplary embodiment of a glass cannon at its best.

Bring your knives and see them go to no avail because in this case, the spoon is mightier than the knife! And Alakazam has two of them.

With that being said, let’s take a spoonful of Alakazam and see why you should be mindful of it in Pokémon Go.

It has a mono typing of Psychic and as such, is weak to the Bug Dark and Ghost types.

Alakazam is resistant to the Fighting and Psychic types.

Alakazam has the following stat distribution in Pokémon Go:

Check out that ATK stat!

Alakazam has one of the highest non-legendary ATK stats and is one of the premier glass cannons in the meta. Its offensive prowess also lets Alakazam serve as a very good generalist.

Alakazam can learn the following moves in Pokémon Go:

*denotes legacy moves that can be learned through Elite TMs

Psycho Cut is an extremely quick fast move and is a clone of the infamous Ground fast move Mud Shot in PvP.

Confusion is a powerful fast move and is the most damaging of all Alakazam’s fast moves. However, Alakazam’s status as a glass cannon makes it more ideal to use Psycho Cut for its amazing energy gains.

Counter was Alakazam’s Community Day exclusive move. It is one of the best PvP moves in general and even without STAB, can give Alakazam some great utility in PvP due to its coverage.

Psychic is the unanimous charged move of choice for Alakazam in both PvE and PvP due to its great damage output.

Future Sight is an extremely strong move but it pales in comparison to Psychic.

Focus Blast is a very expensive move and Alakazam may not live long enough to use it.

Fire Punch is the quickest charging charged move for Alakazam and can help it bait shields and also take types that resist Psychic by surprise.

Shadow Ball is a good addition to Alakazam’s wide movepool. With Shadow Ball, Alakazam can KO Ghost types and also have some much-needed neutral coverage against the meta.

Dazzling Gleam is expensive and simply not viable on Alakazam.

What is Alakazam’s ideal moveset?

Alakazam has a diverse movepool and an equally diverse range of coverage moves from different types.

You can go with Psycho Cut for fast energy gains and pair it with Fire Punch and Psychic or Shadow Ball, for neutral coverage and if you lack the legacy Psychic.

Or you can stick to Counter for more coverage and extensive damage.

You are spoilt for choice!

Alakazam is not exactly the most reliable Pokémon in PvP.

Using Psycho Cut lets is spam Fire Punch and to a good extent, Psychic or Shadow Ball. With the addition of Counter to its movepool, Alakazam has the potential to bait shields and threaten Steel Grass and Fighting types in the Ultra League.

In the Master League, its competition is too high for it to make a mark.

In either way, Giratina’s both forms are a bane to the very existence of Alakazam.

Despite the potential to burn shields and deal considerable damage, the damage inflicted by Team Go Rocket’s shadow Pokémon is too much for Alakazam to handle.

Alakazam is amazing in both raid and gym battles, using its high DPS to breeze past the opposition in a flurry. It’s as simple as that.

Mega Alakazam is a wizard.

No, not just because it looks like Gandalf or Dumbledore.

That’s because Mega Alakazam has the highest ATK stat of all non-legendary mega evolutions in the game.

This also translates to Mega Alakazam to basically having the highest non-legendary ATK stat in the entire game at this moment.

And this wizard is very, very powerful.

Mega Alakazam’s DPS is off the charts… close to the likes of Mega Mewtwo X and Y (while obviously being outclassed by them).

Most importantly, it dishes out (spoons out?) more damage than a Psystrike Mewtwo!

Not to mention, Mega Alakazam looks like a wise ol’ badass who knows very well that its opponents are done for.

With that undeniably monstrous ATK stat of 367, Mega Alakazam will be a damage-churning Pokémon at its best.

The Future Sight is crystal clear. There is absolutely no Confusion regarding the fact that Mega Alakazam will be among the DPS kings of the meta.