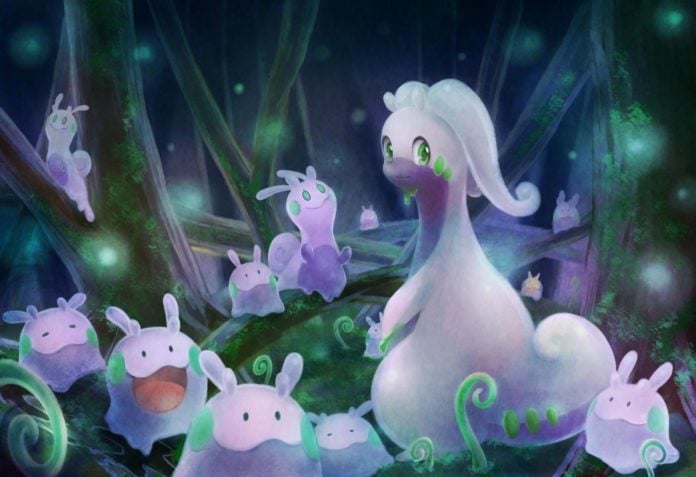 With each generation of Pokémon comes a certain variant of monster that is typically the most powerful non-legendary Pokémon of the region: The pseudo legendaries.

Legendary in power and base stats, these are rare species that are usually in the team of the Elite Four or the Champion. So it goes without saying that trainers pine for them and don’t miss a chance to add them to their team.

In Pokémon Go, pseudo legendaries naturally occupy a pivotal position in the meta and always manage to fulfil a niche or two.

We have five generations of pseudo legendaries in the game and are all set to welcome the latest one to the game: Goodra

Goodra was an oddball during its release in Gen 6. Till then, all pseudo legendaries were dual typed offensive monsters that could send shivers down the spines of even trainers carrying a team of 6 legendaries.

And then came this pure Dragon type with an adorable face and a goofy smile that, while having decent offenses, made an impact with its bulk.

Goodra is the bulkiest pseudo legendary!

So how will this adorable tank fare in Pokémon Go? Will it make a tremendous impact like its predecessors have? We will find out!

Given the pure Dragon typing, it is resistant to all the starter types: Fire Grass Water and Electric

The starters always manage to creep into the PvP meta and as such, this is a boon to Goodra.

Except for Metagross (and Gen 8’s Dragapult), all pseudo legendaries have a 4x weakness. Goodra’s typing and natural bulk help it stand tall against the types that its pseudo legendary crewmates are weak to. So that is undoubtedly a niche that this defensive tank of a Pokémon will successfully fulfil.

Goodra has the following stats in Pokémon Go:

Right off the bat, one can see that Goodra’s stats are all above 200. In fact, Goodra is the only pseudo legendary along with Tyranitar to have all its stats above 200, making it a very neat Pokémon to use.

The bulk is amazing. 242 DEF and 207 HP? Sign me up! This thing is a legitimate tank and will take loads of hits, making it very shield effective.

Also, its ATK stat is decent. To be more precise, Goodra has a starter-like ATK stat that makes it quite serviceable. But the starters shine because of their moveset. So what moves does Goodra bring to the table?

Goodra can learn the following moves in Pokémon Go:

Water Gun is nice but Dragon Breath is one of the best PvP moves and it gains STAB. Enough said.

Now coming to the charged moves, it is worth noting that Goodra doesn’t learn Dragon Claw in the main series games. So it won’t be learning that in Pokémon Go. However, it can learn Outrage. So a Comunity Day exclusive move maybe?

Anyway, coming to the other moves, Goodra is all about nice coverage.

Both Draco Meteor and Sludge Wave cost the same amount of energy. However, though Draco Meteor gains STAB, its ATK debuff would cost Goodra dearly, given that its ATK stat isn’t as high as some other pseudos.

Sludge Wave, on the other hand, gives Goodra a lot of viability. Goodra can KO a Togekiss with Sludge Wave. Plus, it deals heavy damage in general.

Power Whip is an excellent move for Goodra, letting it threaten powerful Ground, Rock and Water types. With Dragon Breath dealing strong neutral damage to most of the meta, a Power Whip can do quite a number.

Muddy Water is Goodra’s cheapest move and has good synergy with Dragon Breath, letting it bait shields and also have the chance of dropping the opponent’s ATK. Nice!

So what is Goodra’s ideal moveset?

Dragon Breath is a no-brainer. Coming to the charged moves, Goodra is destined to be a PvP monster. So the ideal moveset would be:

Dragon Breath with Muddy Water and Power Whip as a PvP lead or mid-battle pivot.

Dragon Breath with Muddy Water and Draco Meteor as a closer.

Goodra’s stats aren’t tailored for PvE. Its underwhelming ATK stat and lack of Dragon Tail in its moveset make it inconvenient for Goodra to chip in high damage. Moreover, the competition is too much from the Dragon type department. Not to mention, it also lacks a mega evolution.

Goodra has a good performance in the lower PvP leagues. This can be attributed to the fact that Goodra’s relatively lower ATK and high bulk syncs in well with the requirements for these leagues. With the dreaded Dragon Breath and a set of good coverage moves, Goodra threatens Swampert, Altaria, Charizard, Aerodactyl, Venusaur, Zapdos, Dragonite and Giratina (Origin).

Goodra performs its best with shields. Under the 1 shield scenario:

Goodra has more than a 70% win rate in both the GL and UL meta. That is quite impressive, to say the least!

How does Goodra dance with the heavyweights? Surprisingly, really well!

Goodra can give a tough time to Groudon, Kyogre, Excadrill, Dragonite, Garchomp, Giratina (Origin), Swampert and Machamp. It really excels in beating Groudon and Kyogre, two of the most common threats in the ML meta. In fact, in the 1 shield scenario, Goodra can even beat a Mewtwo with Ice Beam!

The figures are quite astounding!

In the 1 shield scenario, with Dragon Breath paired with Muddy Water and Draco Meteor:

But Goodra begins to excel by having Dragon Breath paired with Muddy Water and Power Whip:

Goodra reaches its peak performance in the ML meta by embracing the XL status. Get a load of this with the 1 shield scenario:

With Dragon Breath paired with Muddy Water and Draco Meteor

With Dragon Breath paired with Muddy Water and Power Whip

What are the issues with Goodra?

What makes Goodra a threat in PvP?

At the end of the day, this beast is a pseudo legendary Dragon type. Never underestimate them!

Goodra has the following pointers to its credit:

Goodra is more of a unique addition to the meta, bringing bulk to the forefront rather than the traditional offensive prowess associated with pseudo legendaries and Dragon types alike.

That being said, Goodra is going to be fun to use! Not many Pokémon can combine bulk with a neat offensive presence in the Master League. Facing Goodra is never going to be easy and with Dragon Breath in motion, you are in for a fight!

Goodra may not exactly shake up the meta but will undoubtedly put everyone on notice. It is an absolutely worthy addition to any team, so use it well.

Heavy rains are coming to Pokémon Go and with it, a powerful dragon to behold!