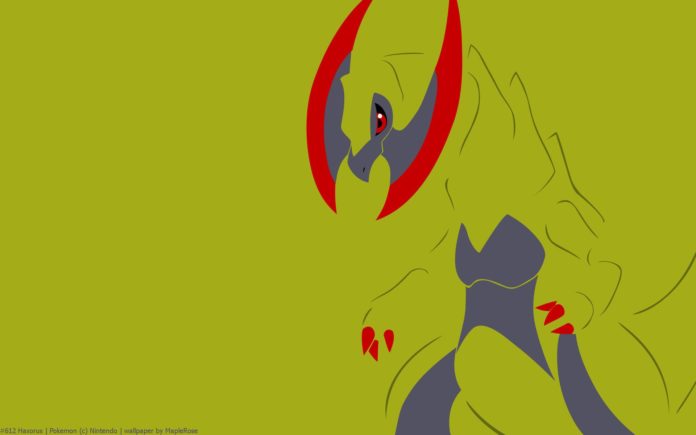 The Dragon type is one of the most OP types in Pokémon Go and the Pokémon meta in general. Each generation brings in at least one Dragon type that carves a wonderful niche for itself in the meta, be it PvP or PvE.

The latest wave of new Gen 5 Pokémon in January 2020 has brought in the mighty Haxorus! Haxorus is undoubtedly one of the most anticipated Pokémon from the Unova region and let’s just say it, it’s an absolute monster!

With stats that draw a comparison with the legendary Rayquaza, it is easy to see why Haxorus is often mistaken to be a pseudo legendary Pokémon. It has the stats and design to boot and make for a perfect pseudo legendary. Gen 3 got two pseudo legendaries, so it would have been totally fine if Haxorus had shared the stage with Hydreigon. But alas, that was not to be.

The good news, however,  is that this fearsome dragon doesn’t need the pseudo legendary status to shine! It has something that actually gives it an advantage over the existing pseudo legendaries. Yeah, you read that right!

Where does Haxorus fit into the current meta? How does it compare to Rayquaza? How much improvement can it salvage in the future? Most importantly, what gives Haxorus an edge over other Dragon types. These are some very natural queries that are bound to pop up in anyone’s mind.

Fortunately, this write-up has all of that covered and will address more. Axew is available from 10 km eggs and in the wild. Needless to say, it is as rare as Gible and Deino. Naturally, Axew is an amazing investment. Let’s see what this axe-wielding dragon has to offer!

Haxorus has a Maximum CP of 3593 at Level 40. It is a pure Dragon type and as such, is weak to the Dragon Fairy and Ice types. Its set of resistances include the Grass Fire Water and Electric types.

The trump card in Haxorus’ favour is its mono dragon typing. This give it lesser weaknesses that most dual typing dragons and also makes it resist all the starter Pokémon types.

Haxorus has the following stat distribution in Pokémon Go:

Do those stats remind you of a certain legendary Dragon type from the Hoenn region? Yes, indeed! Haxorus has pretty comparable stats to Rayquaza. Get this:

In essence, Haxorus is a less bulky version of Rayquaza and that isn’t saying a lot because Rayquaza itself doesn’t have much bulk in the first place. But what gives Haxorus the cutting edge (other than its razor-sharp blades) is its typing.

Haxorus can learn the following moves in Pokémon Go:

Moveset Analysis: The law of the claw

Right off the bat, Haxorus’ only draw is its Dragon type moveset.

The current best moveset for Haxorus is Dragon Tail paired with Dragon Claw.

Dragon Claw is good, no doubt about that. However, it lacks the destruction that is usually associated with Dragon types. More so, Dragon Claw doesn’t justify the raw power that Haxorus is capable of.

Haxorus is more than a worthy and eligible contender for a future Community Day. As its exclusive move, my best guess would be the powerful Outrage. With Outrage at its arsenal, Haxorus can do more DPS than any other non-legendary or non-mega evolved Dragon type Pokémon! So an Outrage Haxorus is worth watching out for. Of course, both the Axew Community Day and Outrage are mere speculation and Niantic can change either of these. For now, let’s keep our fingers crossed.

Haxorus is tricky to use in PvP. Its ATK stat gives it a formidable stance in battle. However, its bulk leaves something to be desired. While its lack of a 4x weakness is good, it lacks the bulk to tank a super effective hit from any of the Dragon types, Togekiss or Mamoswine. Furthermore, if Dragon Claw is shielded, there isn’t much that Haxorus would be able to do.

In the Master League meta dominated by Dragon types such as Dialga, Giratina (Origin), Garchomp and Dragonite, Haxorus doesn’t have a dependable charge move to make a mark.

The best use of Haxorus in the Master League would be when you have a shield or two at your disposal and your opponent lacks shields. That’s where the current Haxorus shines.

Performance in PvE: Gyms and Raids

Haxorus reaches its peak performance in sweeping gyms! With Dragon Tail and Dragon Claw, paired with that crazy 284 ATK stat, Haxorus can clear gyms in a jiffy.

Haxorus proves to be dominating yet again during raids. Dragon Tail hits hard and with the spammable Dragon Claw with some nice dodging, you are going to put a dent in the armour of the raid boss and cut out a good chunk of HP.

Haxorus is literally a budget Rayquaza. It has the highest ATK stat of all non-legendary Dragon types in the game and with a potential Outrage, it is going to easily surpass even Outrage Salamence. Add the fact that it is a pure Dragon type that lets it carry lesser weaknesses, and you have the recipe of a monstrous draconic beast.

The current situation of Haxorus doesn’t render it useless in any way. It is an amazing addition to a Dragon type raid boss counter and sweeping gyms clean. In PvP, there are just too many better dragons.

In conclusion, Haxorus has some amazing potential. It is definitely worth hatching/catching an Axew and evolving it all the way to a fearsome Haxorus.

That axe is deadly. It just isn’t sharp enough now and by the looks of it, is bound to attain its sharpest best in the future. That said, it has its niche uses and is very much serviceable. As a Dragon type enthusiast, I strongly recommend Haxorus myself. Use it wisely!