Niantic has silently started creating 3-D maps of PokéStops and Gyms – by using Ingress as their test platform (source).

On March 12 Niantic has launched a new feature in Ingress that allows players to create 3-D scans of Ingress portals, which are converted into PokéStops and Gyms in Pokémon GO.

The feature is called Portal Scanning and it allows players to generate dynamic 3-D maps of existing Portals. Players are required to walked around the portal and use their phone camera to record a series of snapshots.

From Niantic’s end, the result of meshing together multiple Portal Scans looks like this:

According to Niantic, ideal candidates are statues and sculptures:

Ideal candidates for Portal Scanning are statues and sculptures that Agents can walk around. On a recent scouting mission, our team of NIA researchers scanned The Gandhi Monument at SF Portal with the Portal Scanning feature. Compiled from Portal Scans contributed by multiple Agents, we were able to create the following reconstruction of the Portal:

The recorded data contains a lot of information that Niantic can use to create better AR features:

For those concerned with privacy implications, you will be pleased to hear that Portal Scans are automatically anonymized once they’re uploaded to Niantic’s secure servers, and no Portal Scan information is tied to specific Agent accounts.

On April 25th, Niantic opened the feature to Ingress Agents Level 8 and above, making the feature accessible to a much wider audience.

The Portal Scan feature can be accessed from Contribute to the Portal menu and it takes around 1 minute to do a Scan: 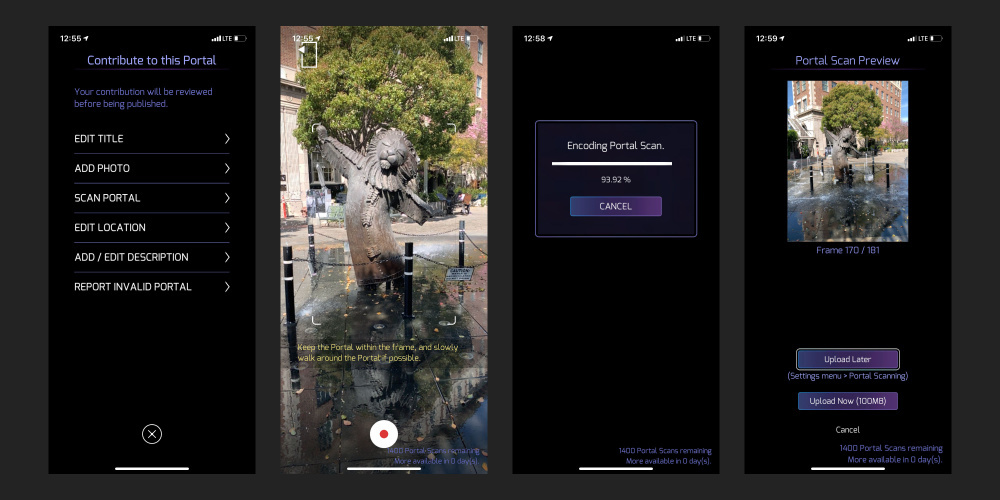 Our seasoned readers may remember that Niantic acquired 6D.ai recently, a company that specializes in creating 3D maps of spaces and objects.

Although the news broke on March 31st, we suspect that 6D.ai had consulted Niantic previously and that their expertise helped build this new feature. Of course, this is pure speculation on our end, but the timing is impeccable.

…and so it begins, the great AR revolution that is. 3D mapping is the next frontier of Augmented and Mixed Reality, as it enables a new type of experiences that are simply not possible without this data.

From hiding in-game items behind 3D objects, to building puzzles that use the realistic terrain and having better object occlusion, 3D mapping is essential.

It’s funny that we’re here already, only 4 years after the launch of Pokémon GO, the game that made AR mainstream and accessible to everyone.

Sure, today we’re using AR in a way that’s simplistic and naive, much like our ancestors did with every emerging technology, but imagine the implications of having a 3D map of every PokéStop and Gym in the game.

Imagine the possibilities, the features and game play loops that can be built on top of this!