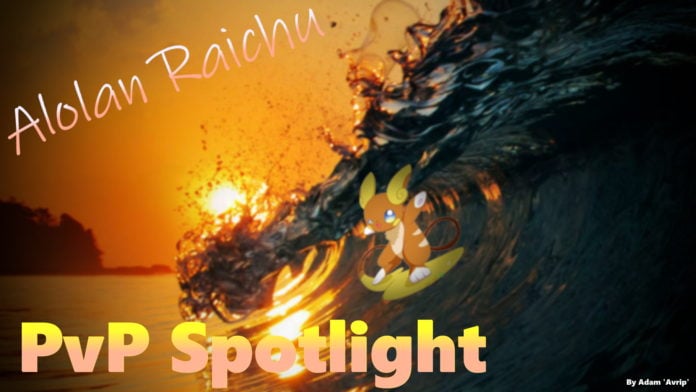 Alolan Raichu rewards trainers with an aggressive energy farming playstyle. If given an energy lead, it can be an extremely dominating threat to deal with. If you can shield lethal charge moves and keep Alolan Raichu alive, you will be rewarded with excessive baiting potential and powerful damage output.

Alolan Raichu at its current state is the most viable it has ever been. With such a diverse arsenal of attacks, your opponent won’t even know what’s coming.

With its dual typing of Electric and Psychic, Alolan Raichu has 4 weaknesses, Dark, Ground, Ghost and Bug type. However, don’t let this scare you away from using it in the Great League as even its counters can take some solid damage from its deadly Charge Moves.

First things first, let’s burn those Fast TM’s on Spark and replace it with Thunder Shock. Not only is Thunder Shock more energy-efficient, it also allows for the use of Charge Moves to be used much more often than any other accessible Quick Move.

With a diverse amount of Charge Moves, Alolan Raichu can be used in many different ways and playstyles. If you’re using Alolan Raichu as a pure Electric type then you’re going to need Thunder Shock, Wild Charge and Thunder Punch. Thunder Punch will be your main tool for baiting shields while Wild Charge will be that tremendously hard-hitting K.O potential attack.

If you’re looking to go with the unexpected route, that can throw your opponents off guard, an Alolan Raichu with the quick move, Thunder Shock and for the Charge Move, Thunder Punch and Grass Knot will suffice. Thunder Punch being your lightning-quick Charge Move, that only takes 40 energy to use, will be your main baiting tool. Grass Knot, which only requires 10 energy, will be a surprising Grass type burst damage output.

The most technically diverse moveset you can possibly run on Alolan Raichu involves having Thunder Shock as your only Electric move while running Grass Knot and Psychic as your Charge Moves. Keep in mind that Psychic got a gigantic damage buff, and with its STAB (Same Type Attack Bonus), it makes a significantly notable addition to Alolan Raichu.

One of the best ways to use Alolan Raichu in the Great League is to build a team composition around it. Synergising Pokémon that will counter its counters will be crucial in outplaying and staying one step ahead against your opponent.

On May 1st, 2019 the Silph Arena held ‘The Nightmare Cup‘, Alolan Raichu was one of the most cost-efficient solid picks in the whole Tournament. Its role in The Nightmare Cup was to be an exceptional Lead Pokémon, dealing incredible neutral damage while forcing your opponent to burn valuable shields.

Shields were your best friend in The Nightmare Cup as keeping Alolan Raichu alive in battle was a high priority, with the potential to sweep your opponent if played correctly, Alolan Raichu was a force to be reckoned with.

Pokémon such as Xatu, Poliwrath, and Bronzong would not be able to stand a chance against Alolan Raichu in the meta, however, Dark and Ghost types could melt through Alolan Raichu if not shielded accordingly.

July 1st, 2019 marked the beginning of ‘The Jungle Cup‘ which you will never guess who was a top tier pick… that’s right, Weedle! No, of course not, it was Alolan Raichu.

Its dual typing allowed it to resist Fighting type moves which in a meta that was highly dominated by Vigoroth, the fact that it could resist the move Counter, made Alolan Raichu a great choice in this cup.

Although you are resisting Fighting type moves, you are also adding on the weakness of Bug types. Alolan Raichu was a double-edged sword which on one hand could withstand attacks from the highest picked Pokémon in that meta being Vigoroth but on the other hand, would need to rely on shields or a fast swap from the use of Pokémon such as Vespiquen, Venomoth, and Beedril.

This marks the first cup that Alolan Raichu can show its new potential with Thunder Shock finally being added into the movepool and the buff to Psychic making it truly a scary pick for this cup.

Steelix, one of the hardest counters to Alolan Raichu due to it knowing Crunch and Earthquake, are both super effective against Alolan Raichu. This can be played around with by having Pokémon to complement Alolan Raichu, Pokémon such as Poliwrath which can take on Steelix and for your third slot, having a generalist such as Dusclops to cover the Ghost and even the Steel types due to it having access to Fire Punch.

With the versatility of Alolan Raichu in The Sinister Cup, meta dominant Pokémon such as Drifblim, Poliwrath, and Empoleon become easily overpowered by the assortment of moves and farming potential Alolan Raichu offers in this spooky cup.

The Ferocious Cup was the Silph Arena’s October themed cup, featuring land-based Pokémon that walk on 4 legs, or 2 legs with a tail (with a few exceptions).
Thankfully Alolan Raichu meets these requirements. Alolan Raichu was an off-meta pick that did well against the strong Water types such as Vaporeon and Bibarel.

One of the main issues with Alolan Raichu in this cup was Umbreon which is a direct counter to Alolan Raichu. Umbreon was a must-have for many trainers team compositions due to its bulk and high damage output. Ground and Dark type Pokémon such as Nidoqueen and even Skuntank caused havoc amongst Alolan Raichu which made it a risky pick in The Ferocious Cup meta.

For Alolan Raichu in the Great League, the ideal IV spread in order to show its true potential is 1/15/15 which means you will want to have an Alolan Raichu with 1 Attack, 15 Defence and 15 Stamina. Now obviously this is impossible to get from a raid since the minimum IV you can acquire from a raid is 10/10/10 however with the ability to trade other trainers, you can attempt to flip it by trading and hope that the IV’s drop to as close as possible to 1/15/15.

If you would like to learn more about IV’s in Pokémon GO PvP then be sure to check out our article discussing how IV’s work completely separate to other aspects in Pokémon GO such as for raiding and gym defending, why a low attack stat is better for PvP, comparing the difference between a perfect IV Pokémon and one with lower stats and other helpful information regarding the topic.

With how easy it is to acquire an Alolan Raichu from raids, which keep in mind can be solo’d and how little Stardust you will have to use to power up Alolan Raichu for use into the Great League, it is a no brainer if you’re looking to get a budget top tier Pokémon for your team.

One other thing you must keep in mind is that Alolan Raichu in an Open Great League tournament can be out picked by Charm users which have grown in popularity with the move being added in, also Steel types will completely wall Alolan Raichu unless you have Pokémon to back it up in battle for when the situation arises.

With the announcement of GO Battle League, trainers globally are beginning to prepare their strongest team to fight it out to become victorious and climb the ranked ladder. Time will tell if Alolan Raichu will be a solid pick or not for it, however in previous Silph Arena tournaments, it has evidently been an outstanding pick and one that has been highly suggested by many to have on a team composition.

So trainers, get out there, raid until you get yourself a shiny chocolate Alolan Raichu and always remember… shinies do more damage! (or not, but they sure do look good in battle).