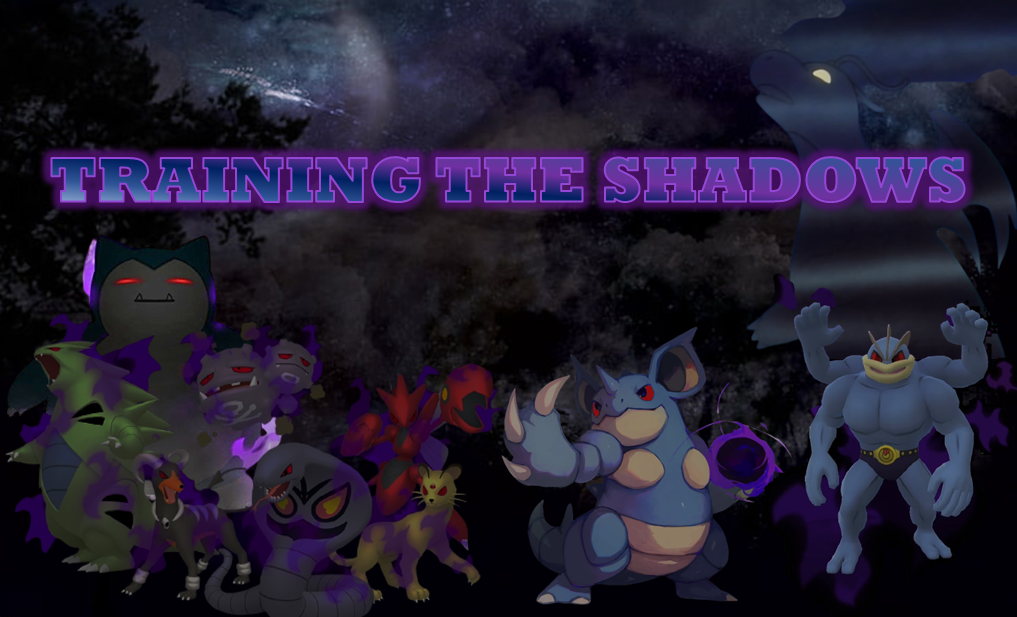 From the shadows, they come….

So let’s not beat around the bush. I said a few days ago I was going to try and give folks a field guide to what Shadow Pokémon to prioritize TMing Frustration away from during the current A Looming Shadow Returns event (running currently until November 13th 10am local time). We get several days to TM away Frustration and make our Shadow Pokémon usable. (Eat it, Professor… who needs purifying anyway? 😈) Well here’s the promised guide!

With over 200 Shadow Pokémon currently available in Pokémon GO, obviously I can’t hit everything. But I going to try and highlight some of the top options with some detail (and my customary simulations from PvPoke) — the ones you really REALLY want to make sure you prioritize TMing during this event, even if you don’t have the resources to build them up yet — and then just bin some other things to hit up as you’re able.

All that aside, we ready? Good, then let’s goooooo!

These Pokémon should be your highest priority. If you’re low on Charge TMs, do these first. In many cases, they are upgrades (or at worst, very viable and interesting “sidegrades”) to the non-Shadow versions in one or more leagues. Once again, if you do nothing else during this event window, TM Frustration away from these!

This one probably comes as no surprise, but the numbers really speak for themselves, don’t they? Shadow Nidoqueen is an overall big upgrade in Great League and a sidegrade, at worst, in Ultra League. There’s really no reason NOT to TM one or two (or more!) of these while you can. You CAN run her with just Poison Fang, but Earth Power (or Stone Edge, if you’re feeling spicy) get some key pickups she can’t do with Fang alone. Even if you don’t intent to invest in them–or have grown more hatred for Nidoqueen of late than you ever thought possible–TM a few while the opportunity is there.

No real surprises here either… Machamp has been going strong as a Shadow basically since Shadows became available. Great League is by far the best place for it to stand out as compared to non-Shadow, but it’s a very viable sidegrade in Ultra and Master too if you have candy and dust to burn. Also note that while Cross Chop is usually preferred in Great and Ultra Leagues, Close Combat is usually the way to go in Master League, if you didn’t know that already.

One of the most popular Shadows, and certainly one of the cheaper ones to build, but the actual results are somewhat mixed. I would say that a good Shadow Swampy is worth building for whatever league you need it in, but only in Ultra can it really be called an upgrade, and even that’s arguable with some of the big names on that list of new losses. Master League seems least worth it… in addition to the new losses, it struggles more than non-Shadow in all shared wins, coming out with less HP remaining in all shared matchups besides Landorus, Excadrill, and Machamp, and often double digits less. TM a hundo or near hundo one, sure, but I wouldn’t build it up now, personally.

All those sims are with Earthquake, by the way. I did check Sludge Wave and it’s generally a downgrade in all three leagues.

Getting a good Shadowbama in Great League should be one of your top priorities… it’s not a straight upgrade, but MAN that list of new wins is hot. 🔥 Ultra League, though… it’s a sidegrade, with some really good AND really bad points for either side.

And here we have sort of the opposite: Great League Shadow Venusaur is a slight overall downgrade (though beating Bastiodon is always a good feeling), but even I was surprised to see the good showing Shadow Venu puts in for Ultra League. You lose a couple of the prominent Fighters, but otherwise the news is all good… very good considering who all is on that win list now.

It’s just a sidegrade, but it’s a good one. Giving up Registeel and DD that are part of what make Beedrill special hurts, but beating things like Umbreon, Froslass, Trevor, and Politoed will help you feel better.

Master League Priority: HIGH, believe it or not!

The numbers kind of speak for themselves: Lapras is able to shrug off the 20% nerf to its Defense much better than most Pokémon and enjoys great success as a Shadow, especially in Ultra League. And if you have a REALLY good one, did you know Lapras actually has play in Master League too? Shadow Lapras especially, as it picks up wins non-Shadow cannot get versus Origin Giratina, Excadrill, Swampert, Zekrom, and Zacian!

Dragon Tail Flygon is THE way to go now, if you hadn’t heard. Shadow Flygon is an intriguing sidegrade in Great League, but the real story is Ultra League, where Shadow Flygon is definitely underrated these days. This is a sneaky good one to pick up and even build in the here and now if you’re looking for secret sauce in Ultra.

The O.G. Dragon remains a PvP fixture all this time later, which is pretty astounding all things considered. The buff to Dragon Tail makes both Tail and Dragon Breath variants quite nice these days, with Breath being a bit better in Great League and Master League, and Tail pulling ahead in Ultra League — and I primarily simmed non-Shadow vs Shadow above following those trends — but both are perfectly viable with their own nuances throughout. Shadow Dragonite is pretty consistently an upgrade, especially in Great (Breath) and Ultra (Tail) Leagues, and only for Tail in Master League (where Dragon Breath actually dips in performance as a Shadow, the only time that Shadow is arguably worse, but still has merit). Between the cost and the small performance boost, I’d consider ML Dragonite a lower overall priority, but still worth TMing one, and do try and at least TM a couple GL and UL candidates while you can, even if you can’t build them up just yet… Shadow Dragonite is obviously a very hefty investment. ‘Nite is a known commodity in Ultra, but a GL Shadow ‘Nite is an underrated, high pressure generalist supreme.

One of the more popular Shadow Pokémon of late, particularly in this year’s Halloween Cup (dang thing was everywhere), though generally the Shadow version shines brighter in Ultra League rather than Great League. Either way, it’s a more than acceptable sidegrade that probably isn’t going away soon (or ever) as a competitive PvP Pokémon.

Pure sidegrades, with practically no variance in the number of wins, just what Skuntank does win. You can look over the lists yourself and decide if building one (or two!) is worth it, but yes, in a vacuum they are both interesting enough to be “worth” it.

Shadow Snorlax is almost universally better overall, but there is enough good going on for Shadow and non-Shadow that it’s good to have both where you can afford it. Snorlax in Master League is best in (though certainly not exclusive to!) Premier play, and in Ultra and even Great League, a good Shadow Snorlax has lots of play in limited formats especially (Cup, Remix, Premier, etc.) and should remain a staple of PvP for a long, long time to come. Snorlax is not cheap but is a pretty futureproof investment.

Okay, whew. That felt like a massive writeup already, and yet I also feel like I’ve barely scratched the surface! But we’re far from done. I am going to shift to more of a bulletized format for the rest, but here are a bunch more recommendations. If you’re swimming in TMs, the next couple lists are all very worthy of getting unFrustrated. Let’s start with ones that are going to be particularly important come, say, a month from now….

Out of those, I would try to prep good candidates for those I put in italics, and would consider the ones that are also bolded to be especially a priority (like Beedrill, which I already went into earlier). Charizard in particular is nasty with Dragon Breath pressure in Great and especially Ultra Leagues, and Shadow just brings more pain… I highly recommend that, Beedrill, and an Aqua Tail Shadow Gyarados or two if you can manage it. Counter Alakazam is really just spice, but it brings a whole lotta hurt and WILL matter in some future meta (Counter/Fire Punch/Shadow Ball is hot stuff). Bullet Seed Shiftry is a great alternative to Snarl, just a sidegrade but one that does some silly stuff like beat Umbreon and really pressure Mud Boys and such. And while Payback is generally better (IMO) on non-Shadow Machamp, Payback Shadow Champ is certainly viable (in Ultra especially) and a very nasty surprise when not expected. If you’re swimming in TMs and Machop candy, hey, why not? The rest (Electivire, Magmortar, Dusknoir) I wouldn’t worry too much about, but if you missed them the first time, this is your chance. You never know what the future may hold for them, right?

As you likely guessed, this is a shout-out to all the Shadow Legendaries we’ve been able to accumulate over time. IMO, these are ALL worth TMing away Frustration, even ones with horrid IVs. And I mean, even hoarders are only going to have, what, maybe a dozen of these? You can afford THAT many spare TMs, I hope! But if not, I’ll put them in rough order of best down to worst.

POPULAR AND/OR HIGHLY RANKED, BUT….

The following are all highly ranked in PvP and generally popular builds as Shadow Pokémon, but after examining and/or using them myself, I’m not as impressed. I would still throw a couple TMs at these while the opportunity is there, because they ARE good PvP Pokémon in general, just moreso as non-Shadows, in my personal opinion… and backed up by the numbers: they’re usually downgrades overall as Shadows.

NOT AS HIGHLY RANKED, BUT PROBABLY SHOULD BE!

IF YOU STILL HAVE EXCESS TMs….

Here’s a list of some stuff that could be fun as current (or future!) spice. I consider these all worth TMing away Frustration, but only if you still have them to spend after addressing all of the above. In rough order of PvP viability:

Whew, that ended up a lot longer than I anticipated! (How does that ALWAYS happen to me? 😅) I could go even longer, believe it or not, but we’re already two days into the TM Frustration window and I want this to get out the door so you all can start using this guide to help inform your TMing decisions. Hope it’s a help… good luck!

Until next time, you can always find me on Twitter for near-daily PvP analysis nuggets, or Patreon. And please, feel free to comment here with your own thoughts or questions and I’ll try to get back to you!

Thank you for reading! I sincerely hope this helps you with your TMing decisions, and that you are able to get all the good Shadows you want in the coming days. Good hunting, and catch you next time, Pokéfriends!