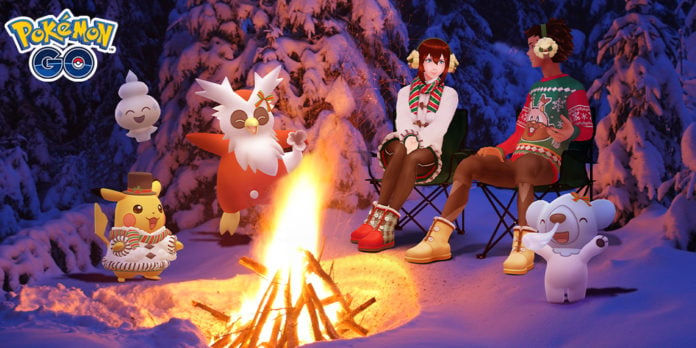 The Holiday Cup is held in the Great League format, and it allows only Pokémon 1500 CP and under. The Holiday Cup limits Trainers to use only only Normal, Grass, Electric, Ice, Flying, and Ghost typed Pokémon.

During the event, you’ll earn twice the Stardust for winning battles and completing battle sets.

Reminder, here are the rules for the Holiday Cup:

The Holiday Cup meta is essentially a trimmed down version of the Great League metagame, with some of the top contenders removed due to type limitations. For example, don’t expect to see Azumarill, Swampert or Galarian Stunfisk in the Holiday Cup.

Even outside of Holiday Pokémon, a metric ton of eligible Pokémon are commonly found in the top of Great League ranking charts. Here’s a list of best 40 Pokémon to use in the Holiday Cup, as ranked by PvPoke.

My PVP Academia has a great video that quickly explains the entire Holiday Cup metagame. Worth a watch, for sure!

Top 40 Pokémon to use in the Holiday Cup

Our go-to team for Holiday Cup

Altaria is a beast in this format and provides coverage against Counter users, Alolan Marowak, Vigoroth, Magnezone, Diggersby and Snorlax. Grass types are also easily defeated. Altaria does lose to Wigglytuff and Alolan Sandslash, but both can be managed by other members of this team.

Alolan Marowak is one of our favorite Great League Pokémon, and it’s a perfect partner for Altaria. A-Marowak provides coverage against Wigglytuff, Alolan Sandslash, Abomasnow, Whimsicott and most other Ice types that can defeat Altaria. Lanturn, Obstagoon and Diggersby are A-Marowak’s most common counters in this format.

Obstagoon is a relatively fresh addition to the GL meta, but it proves excellent against A-Marowak and – more importantly – against Ice types. Obstagoon has access to Counter, which makes well suited to counter Froslass, Drifblim, but also Diggersby, Magnezone and Alolan Graveler.

Wigglytuff is a monster, with Charm dealing a stupendous amount of neutral damage to most opponents in this Cup.

Vigoroth is always a good idea in GL, so we tend to use it here if Obstagoon is not available. Counter leads the offense.