The Lore of the Weather Trio

The Weather Trio are Groudon, Kyogre and Rayquaza of the Hoenn region. They are also often referred to as the ‘elemental trio’ and the ‘super ancient Pokémon’. Groudon is a Ground type, Kyogre is a Water type, and Rayquaza is a Dragon and Flying dual type.

Kyogre is the 382nd Pokémon in the Pokédex. Kyogre does not evolve, but it can become Primal Kyogre if it holds the Blue Orb in the main series. This has not yet been added to Pokémon GO so we are unsure how these mechanics will work. Kyogre has the ability to expand oceans, as well as control water and rain.

It is said to have saved people from droughts using these abilities, and in the Pokédex is often described as the ‘personification of the seas’.

In design, Kyogre has many orca/whale like elements, and the stripes on its body glow when it is at its most powerful. Its tail appears to have been tattered into 4 sections, possibly due to its endless battles with Groudon, or potentially as a comment on human treatment of the oceans.

Kyogre may take inspiration from the Leviathan of Judeo-Christian mythology. It is depicted as as giant sea creature, and in later lore is often shown as a giant whale or sea monster It is said that Jonah was swallowed by a Leviathan, and the term is often used to describe all large whales in modern times.

The Leviathan was considered ‘master of the seas’, which suits Kyogre well, as a whale that can control the seas. In appearance the original Leviathan was shown as a sea serpent which doesn’t fit Kyogre, but the themes of Leviathan match it well.

Kyogre has access to a variety of type moves, including Water, Electric and Ice.

Both Kyogre and Primal Kyogre are pure Water types. It is weak to Grass and Electric, and is a powerful Pokémon to use against Fire, Ground and Rock. 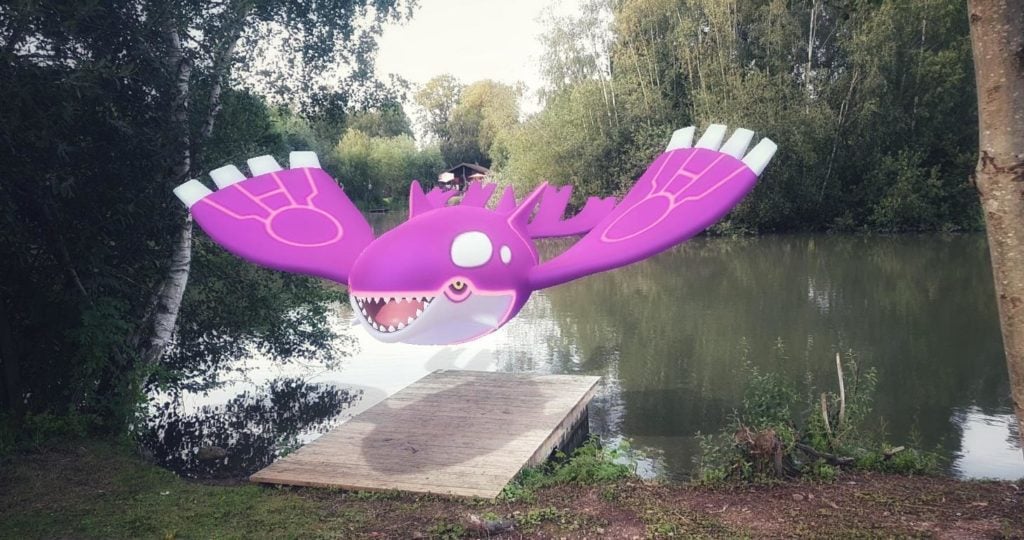 Groudon is the 383rd Pokémon in the Pokédex. Groudon does not evolve, but it can become Primal Groudon in the main series if it holds the Red Orb. This has not yet been added to Pokémon GO so we are unsure how these mechanics will work.

Groudon has the ability to expand continents, and it is also said to be able to cause droughts and volcanic eruptions, which it uses to create more land. It has been said that Groudon has saved many people from flooding.

Groudon in design is quite dinosaur like, with black markings that glow with power, and many spikes that cover its body.

Groudon may be inspired by the Behemoth of Judeo-Christian mythology. The Behemoth is described as a land monster that lives in the desert, and is often called a chaos beast.

Groudons name may come from a combination of ground and don, which is Spanish for Lord. Don also means tooth in Ancient Greek and is commonly used in dinosaur names, which Groudon takes inspiration from in terms of design.

It may also involve 土 do which is Japanese for ground, andドン don which is a Japanese onomatopoeia for a very loud crashing noise.

Groudon has access to a variety of move types, including Dragon, Grass, Fire and Ground.

Groudon is a Ground type, whereas Primal Groudon is a dual type of Ground and Fire. It is weak to Grass, Water and Ice, but it strong against Electric, Poison, Steel, Fire and Electric. 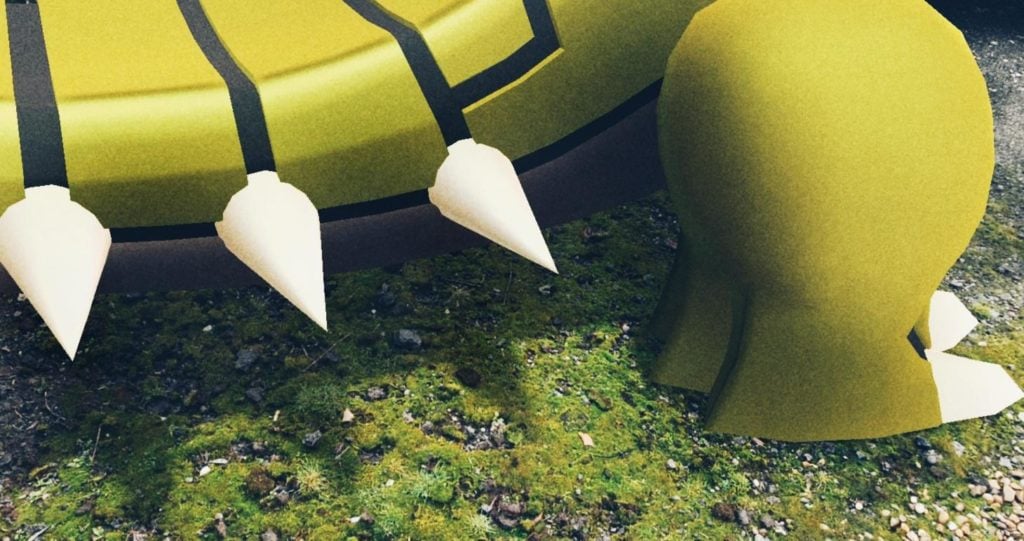 Rayqauza is the 384th Pokémon in the Pokédex. Rayquaza has a Mega Form that is currently unreleased in Pokémon GO. Unlike Kyogre and Groudon it does not have a Primal form. Raquaza is known as the ‘trio master’ and is believed to solve conflict between Kyogre and Groudon by descending from the skies, as it lives in the ozone layer.

Raquaza is a large serpent like dragon, it is often considered reminiscent of a Komodo dragon because of its visible pink gums. There are several inspiration for its design, including the traditional Japanese dragon, and the Lindworm.

Japanese dragons are often depicted as long, winding, wingless serpents, that are usually shown having power over water, which could be taken as control over Kyogre and Groudon.

Symbolically it is considered a deity that fosters harmony, in Pokémon by settling the battles between Kyogre and Groudon. It is also known as the God of the Dragons and represents evolution.

The Lindworm is described as a long dragon without wings, and is shown as a serpent like dragon. As Rayquaza has no wings, but flies, the Lindworm inspiration fits nicely.

Rayquaza may also be inspired by the Ziz. The Ziz is a part of Judeo-Christian mythology, and rules over the sky and birds as a primordial beast.

Finally, Rayquaza may also be inspired by the Quetzalcoatl, a serpent deity from Mesoamerican culture. It is the Aztec god of wind, air, and learning, and is depicted as a feathered serpent that flies through the air. Quetzalcoatl created the boundary between the land, sea and skies.

Rayquaza’s name may come from Raqiya, the Hebrew word for firmament. Firmament means the heavens or skies. It also may be a combination of ray and quasar, ray like a ray of light, and a quasar is an astronomical body that produces vast amounts of energy and light.

It may also be a combination of 烈 retsu, Japanese for violent or furious, 空 kū Japanese for sky, and 座 za Japanese for seat or location, which can be taken to mean ‘one that sits in the ferocious heavens’.

Inside Rayquaza is an organ referred to as the mikado organ. This organ contains the same power as a Mega Stone. Rayquaza consumes meteoroids as it flies through space to allow the organ to become filled with power, allowing Rayquaza to Mega Evolve.

帝 mikado  translates from Japanese as emperor, as well as being another name for the Emperor of Japan, and also as 天皇 tennō in Japanese, which can be translated as either ‘heavenly sovereign’ or ‘king of the heaven/sky’.

Rayquaza has access to a variety of moves, including Dragon, Flying and Rock type moves.

Rayquaza is a Dragon and Flying dual type, and this typing remains when it mega evolves. It is weak to Dragon, Ice, Fairy and Rock, and is strong against Dragon, Fighting, Bug and Grass. 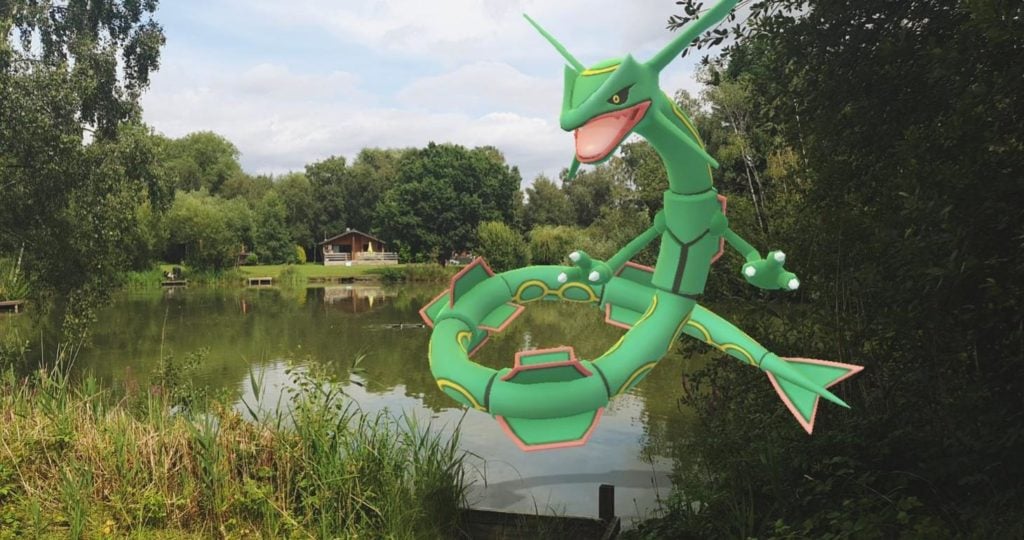 As a trio, many of the inspirations for these individual Pokémon make a lot of sense. The Leviathan, Behemoth and Ziz from Judeo-Christian mythology that inspire each of these Legendary Pokémon individually, rulers of the sea, land and air, tie together beautifully.

Each Pokemon represents a different elemental sphere, Kyogre has dominion over the hydrosphere (water), Groudon over the lithosphere (land), and Rayquaza over the atmosphere (sky), as shown by their types.

The trio are unusual in that Kyogre and Groudon have primal forms, and Rayquaza has a Mega form. Primal Reversion is said to return the Pokémon to their original ancient power, whilst Rayquaza is said to be the first Pokémon to ever Mega Evolve.

They are an immensely powerful group of Pokémon, with many uses in Pokémon GO, and well worth raiding and investing in.