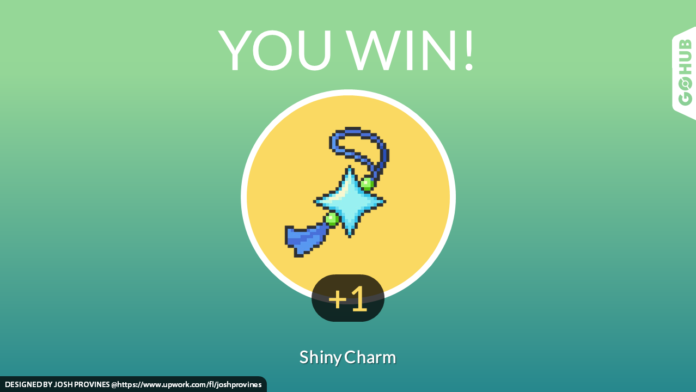 Shiny Pokémon to Look Forward to in Pokémon GO: Part 1

Trainers, It’s been nearly a year since I wrote an article explaining how The Shiny Charm from the main series Pokémon Games would be a welcome addition to Pokémon Go (You can read the original article here.) The question is: Do I still feel this way in 2019?

So far in 2019, we’ve seen an abundance of new shiny Pokémon forms released, an increase in event frequency, and also new types of events. This means that we have been given more ways to encounter Shiny Pokémon than ever before! Research Tasks, Wild Encounters, Raid Battles, Community Day, Limited Time Events…the list goes on. So, why would we need a way to increase our chances of finding certain Shiny Pokémon?

Before I answer that, let’s take a look at what it is and how it could work as an item within Pokémon Go:

The Shiny Charm, What’s That?

As a comparison, the “odds” of stumbling across a Shiny Pokémon randomly in Generation 6 or 7 games are 1 in 4095. This means you may play the game for 1000 hours and never see one – Whilst In Pokémon Go, the odds were determined to be Approx. 1 in 450 for Wild Encounters….which some players believe is already too low.

What Does it Do and How is it Linked to Shiny Pokémon?

Once you have obtained the Shiny Charm, your chances of encountering a Shiny Pokémon by various means is increased by 3x. Yes 3x! This means that, instead of a base rate (in the later games) of 1 in 4095, you can instead enjoy an improved rate of 1 in 1365. If you use what’s called “The Masuda Method” to breed Pokémon using a foreign Ditto or Pokémon, the odds are increased again to 1 in 512. You can read my article on Pokémon Breeding and how it could be implemented in Pokémon Go here.

There are various other means to encounter Shiny Pokémon, however – Such as “chaining” in the Let’s Go series. This can reduce the odds of finding a shiny to below 1 in 275!!

How Could it Work in Pokémon GO?

In my previous article, I talked about how I believe it could be rewarded for completing gold medals for each region of Pokémon. While I still think that this is a plausible idea, I was talking about the item as if it was always active and non-consumable. (meaning it would just exist in your bag like the Camera or Infinite Incubator)

I now think that if it were to be released, then it may be more likely to be a consumable item. One that may have a 30-minute timer on it just like Incense, Lucky Eggs, and Star Pieces.

When Would They be Used?

In Pokémon Go and Pokémon games in general, Shiny Hunting has a lot of grey areas. Odds have to be worked out by dedicated teams (such As The Silph Road Research Division – “Love you guys” – ShinyhunterLiam) as no actual indication of shiny odds have ever been hinted at or mentioned by Niantic or Nintendo itself. Results have been shared amongst communities but we all know that person who seems to get multiples of every single shiny Pokémon, at every event. (Sam Cook – You know who you are! ¬_¬) -However, random is random and so us shiny hunters hunt on.

What I have noticed from the fine work the guys over at TSR have done on Shiny Rates is that there is a bit of a gap between the lower rates of Shiny Pokemon Encountered on Community Days and Legendary raids, to that of Wild Encounters.

I have added the full chart below so you can see what I mean.

I have color-coded the results to illustrate the chances of getting a Shiny Pokémon via each method.

I’m not saying for a second that the rates aren’t already low enough for wild encounters but imagine receiving a 30 minute consumable from a raid boss, from a research task, or during an event and you say to yourself “Right, I’m gonna go visit that Growlithe Nest by the Park, drop an incense, Lure up the stops and spend the next 30 minutes really trying to get myself that Shiny Growlithe that I’ve desperately wanted since 2018.”

I believe it would give Shiny Hunters and casual players alike, yet another way to obtain Shinies and would even go some way towards bringing those Scorned players who say “I never get any Shinies outside of Community Day…Hmmph”

With this in mind, let’s take a look at some of the ways that a shiny charm could be awarded to players if it were to get implemented:

The majority of players have mixed opinions about Shiny Pokémon. Some wish there were more available, some wish they would slow down on the release of them, and others just don’t care for them at all. One thing is for sure though, and that is that giving players another way to encounter Shiny Pokémon will mean more Shinies obtained, more Shinies obtained means that certain Pokémon forms would be devalued.

Enough players already feel that Community Day Shinies are practically worthless because they are so readily available. I have to agree with this, as when discussing potential trades with other players, you find that nobody wants those “common” shinies.

A lot of players might scoff at the idea of an item that increases the odds of a Shiny Pokémon being discovered but I think its a viable idea that has some merit when used sparingly.

I was recently at an Alolan Marowak Raid with my friend Sadie and then again at an Absol raid with my pals Ryan and James. Raids in which all three of them got a Shiny (2 x Absol and 1 x Marowak). When this happens, it takes a lot of effort and energy to not be super mad and salty, but at the moment, you feel a mixture of anger, bitterness and then, later on, appreciation. I couldn’t help but think that having an item that you could pop right before going into the raid that would give you an increased chance at red Absol would be so handy given its low drop-rate.

We all know a player like Ryan Ramsey from my community that managed to bag not one, not two, not three, but FOUR shiny Latias’ but after 50+ Groudon raids, couldn’t get a Neon Yellow Groundon.

It would need to have some limits though – I feel that if the code worked similar to how it does for the main series games then it could increase the odds by maybe one or two times without being too overpowered – imagine having 1 in 25 odds of a Shiny Absol instead of 1 in 75? Maybe it could even have a one Pokémon Limit whereby once you get the shiny, it doesn’t work anymore on that Pokémon – A shiny hunters dream and secret weapon…

Does the Shiny Charm have a place in the game in 2019, given the number of shinies already dropping? I believe so…I think that it’s one of those items that may require careful planning before using it in a similar vein to that of Star Pieces or Lucky Eggs to maximize the benefits from it.

Ultimately though, adding this item would be a gamble for Niantic. They could implement it as a consumable but there would be some mixed reviews and opinions so it would take some careful thought.

Shiny Pokémon to Look Forward to in Pokémon GO: Part 1