Pokémon GO Vileplume vs Bellossom: how to spend your Oddish Candy 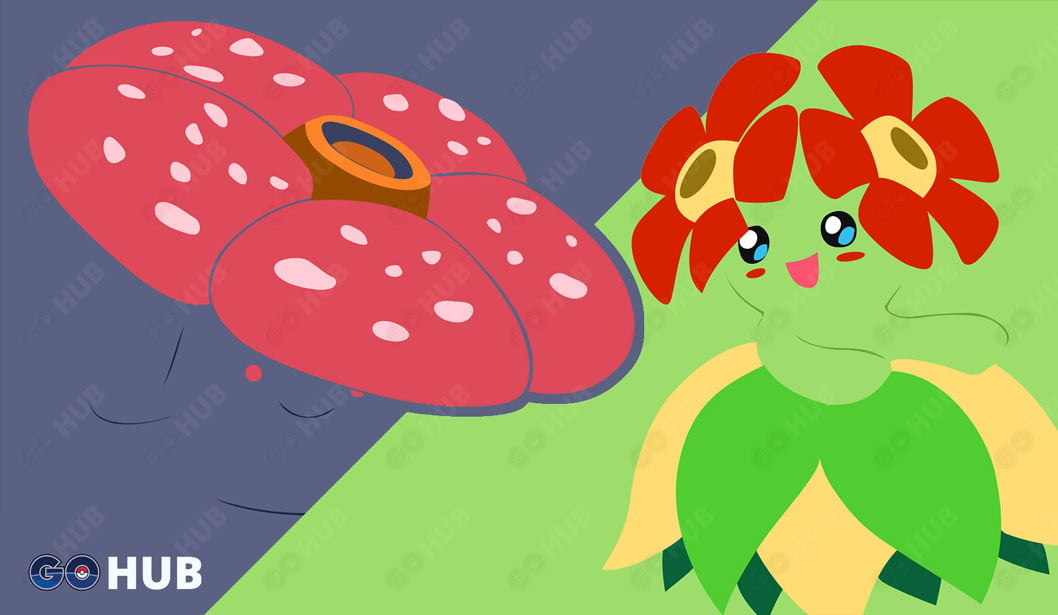 USER GUIDE | Submitted by marcosm8 on March 14 2017, updated by Zeroghan on October 04 2019After the Poliwrath vs Politoed duel, we should have another duel, this time the turn is for Vileplume to face Bellossom. Again, we will analyze both options individually and then compare them with the current gym, raid and PvP meta in mind. Do note that both Bellossom and Vileplume require 100 Oddish candy, and Bellossom needs a Sun Stone also. Keep that in mind as we compare these two contenders.

Vileplume typing is dual (Grass and Poison) and it comes with the following stats:


Vileplume was a rather good attacker back when Pokemon GO was released, but nowadays it is much less powerful than other Grass Pokemon like Venusaur, Roserade, Sceptile, Tangrowth and Exeggutor. Vileplume is not terrible, but it simply doesn’t have a place in the high raid or PvP meta game.

Vileplume can learn Acid and Razor Leaf as fast moves, and Petal Blizzard, Solar Beam, Sludge Bomb and Moonblast as charge moves. You’re probably looking for Petal Blizzard and Sludge Bomb on your Vileplume, so the chance to get a good moveset is really high if you evolve / TM through the move pool.

PvPoke ranks Vileplume as #102 in Ultra League, and around the same number in Great League, which is not great, but not terrible as well. In general, our advice is not to spend Stardust or Candy on power ups – get a high level weather boosted Oddish and evolve straight into Vileplume if you want one.

Bellossom’s is a pure Grass type, with slightly better defensive stats than Vileplume. Although the CP difference looks significant (~200), the stats tell a different story:


Compared to Vileplume, Bellossom can’t learn Solar Beam but it learns a much better move: Leaf Blade. Leaf Blade is a 3 bar move that’s well versed for inflicting high shield pressure in PvP and landing the unexpected charge move in PvE, but combine it with Bellossom’s mediocre stats and you got a wasted opportunity on your hands – at least in raids.

Situation changes a lot when you shift gears into Trainer Battle territory. PvP ranks Bellossom much higher than Vileplume, at around #74 in Great League and #110 in the Ultra League. Admittedly, you should never use Bellossom in UL matchups, as it costs too much Stardust to power it up. The only problem we see with GL Bellossom is it’s second move: PvPoke recommends Return Normal, which is only obtained by evolving a Purified Oddish / Gloom. The process of obtaining a Shadow Oddish is not terribly complex, but it is still one additional step compared to Vileplume.

But alas, Return is a guaranteed move, which means less TM madness and a simpler process to unlock and adjust the second charged move.

Although Vileplume has better stats, higher Max CP, access to better moves for PvE, the decision is not as simple as one would think. Vileplume is much better than Bellossom in raids and gyms, but it is your top pick there anyway – Venusaur, Roserade and Sceptile rule the Grass meta for now, with no indication that will change soon.

On the other hand, Bellossom is a better choice than Vileplume for Trainer Battles. The pure Grass typing is somewhat unexpected, as most opponents expect a Venusaur instead of Bellossom, and often pack Psychic attackers. Bellossom with Return and Leaf Blade is a menace for shield pressure.

How to decide then? Well, it’s simple:

Sorry Vileplume, but you’re out of luck here.