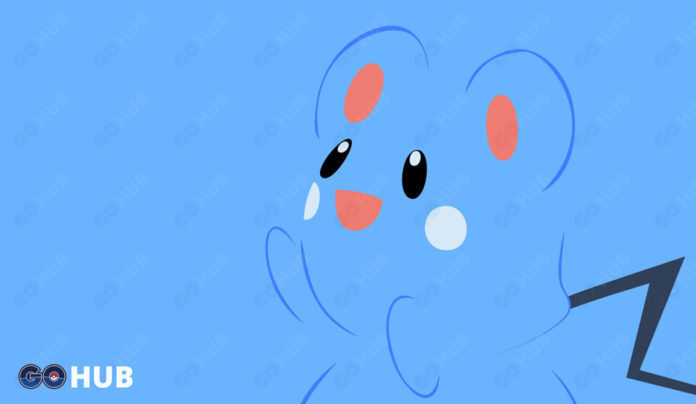 Pokémon GO Azurill, also known as the “polka dot” Pokémon, is a baby Pokémon whose evolutions were already introduced in Generation 2 of Pokémon GO.

Azurill is a normal fairy type, but becomes fairy water when it evolves into Pokémon GO Marill and Pokémon GO Azumarill.

Azumarill really isn’t anything but a pokédex entry, having a Max CP of only 1503, making it useless compared to other primary water typed Pokémon. Besides this, Azumarill has below average stats, rendering him completely useless in the meta.

Where to find Marill and Azumarill

The whole Azurill family is commonly seen everywhere, in or outside a water biome. They are caught for their Pokédex entries alone.

Azurill made its first appearance in “Pikachu’s PikaBoo” – one of Pikachu’s short films. It also made its debut in the cartoon series on the 276th episode of the Pokémon series (Advanced Generation: Episode 2) titled “A Ruin with a View”.

Azumarill in the Pokémon GO meta

Although having access to somewhat strong water type movesets, because of its horrible stats there is truly no place for Azumarill in the meta, it is cursed to be a Pokédex filler and nothing more.

Here are some moves from the Azumarill’s current move pool in Pokémon GO:

Out of all these available moves, we can conclude that Azumarill’s best moveset is:

A normal Azurill is blue all over its round body, it has a pink color inside its ears and white cheeks. A normal Marill is blue on most of its body. It has a white belly and the inside of its ears are red. A normal Azumarill has a blue color on the upper part of its body, and white on the lower part. It has white circular spots in the middle portion of its belly. Its ear is elongated, and has a red color inside.