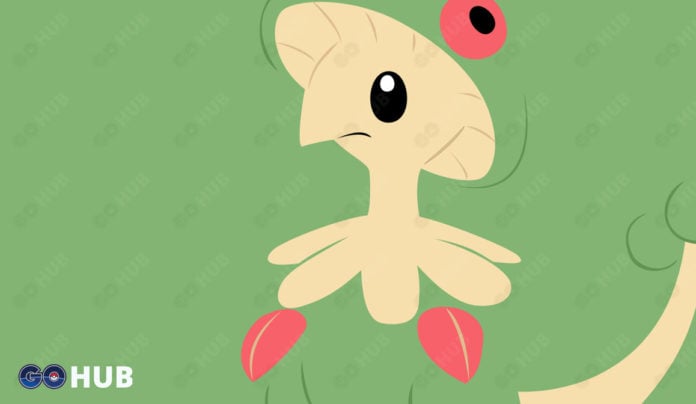 Pokémon GO Shroomish is a pure grass type Pokémon that evolves into a Pokémon GO Breloom with grass and fighting typing. Breloom is the first Pokemon to have this interesting type combination.

Breloom is a strong addition as a hybrid fighting and grass attacker that can fill two roles:

Breloom in the Pokémon GO metagame

Breloom lands as a strong mid tier attacker in the Pokémon GO meta, but also as a surprisingly strong fighting addition. We often consider Breloom to be a version of Heracross that somehow got released worldwide.

Breloom can take up two roles: a Counter / Dynamic Punch Fighter, or a mixed Grass type that has advantage over water types. The only problem with the later setup is that Breloom is easily overshadowed by the far superior Sceptile in that role.

We suggest to build your Brelooms as fighting type filler for your team.

Breloom has been blessed with having access to the best fighting moveset currently available in Pokemon GO: Counter / Dynamic Punch. It’s a fast energy generating moveset with a two bar charged move that benefits from STAB.

All Breloom’s quick moves also benefit from STAB and there really isn’t a moveset which we would say is complete rubbish. We do prefer to avoid Sludge Bomb as there is hardly any niche for it, but it’s still a viable damage dealer in neutral scenarios.

A normal Pokémon GO Shroomish has beige upper body/head with green spots, and green lower body. A normal Breloom has a brown body, beige head, neck, and tail. It has a green mushroom-like cap on its head. There’s a red berry-looking structure on the side of its cap, and on the tip of its tail. A normal Breloom also has a red claws and hooves.

A shiny Shroomish has yellowish upper body/head with orange spots, and orange lower body. A shiny Pokémon GO Breloom has a yellowish body, light yellow head, neck, and tail. It has an orange mushroom-like cap on its head. There’s a bright yellow berry-looking structure on the side of its cap, and on the tip of its tail. A shiny Breloom also has a bright yellow claws and hooves.