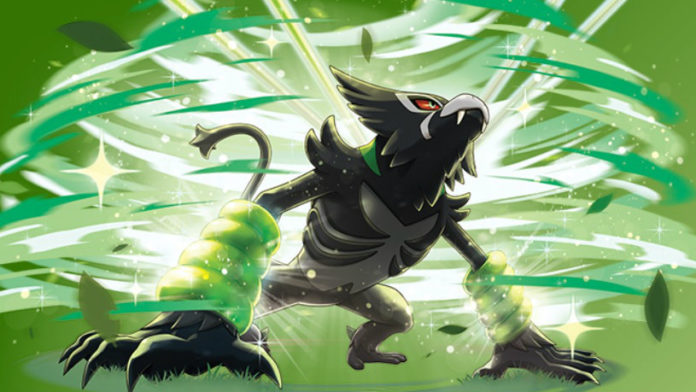 In celebration of the ‘Pokémon the Movie: Secrets of the Jungle’ movie release, Zarude, the Rogue Monkey Pokémon, will be making its Pokémon GO debut! There will be a limited-time Special Research, and Zarude will be one of the final rewards.

You might be wondering: is this thing viable in the PvE meta? The short answer is YES! Zarude has a pretty decent stat distribution along with one of the best grass type movesets in the game. But will that make it a TOP tier raid counter in Pokémon GO? Let’s find out.

Disclaimer: Movesets are subject to change before the official release, so please keep that in mind.

Zarude is a Dark & Grass mythical Pokémon originally discovered in the Galar region (Gen 8). It does not evolve into or from any other Pokémon, but it has an alternate form called Dada Zarude.

According to its Pokédex entries in Pokémon Sword and Shield, Zarude lives in a pack with others of its kind. It’s incredibly aggressive, and the other Pokémon of the forest fear it.

Both Zarude forms have the same stats:

With a Max CP of 3833 at Level 40, Zarude manages to dodge the 9% nerf to its stats. Although a base ATK stat of 242 does not seem that impressive, its well-balanced bulk makes up for it and lets it compensate its “lack” of offensive power with a very decent TDO.

Zarude as a raid attacker (PvE)

As a Dark and Grass type Pokémon, you might be wondering what moveset you should run Zarude with.

Zarude is not exactly a bad Dark type attacker, but there are plenty of better options such as Darkrai, Yveltal and some megas. Furthermore, once Mega Tyranitar comes out it will top the list below.

In the main series games, it does learn Snarl and a couple of unreleased moves in Pokémon GO, so there is still a little room for improvement (?). All in all, Zarude is a decent dark type attacker, but if you want to take advantage of its full potential, you should probably run it as a grass type attacker instead.

Exciting times ahead, as Zarude would currently be the #1 non-mega* grass type attacker in the game.

(*) Mega evolved Pokémon provide a 30% (if the attacks share typing with the mega evolved Pokémon) or 10% (if they don’t) damage boost to all Pokemon on the battlefield while the Mega is in battle. This is difficult to take into account in the DB calculations, so always consider Mega Pokémon a “step ahead” when looking at tables such as the one shown above.

With Vine Whip and Power Whip, Zarude is only slightly outclassed by Mega Venusaur (read the disclaimer above). Mega Sceptile on the other hand will outclass it by far once it comes out, so keep that in mind.

However, you might be wondering whether or not Zarude will make the cut in the lists of counters vs. T5 raid bosses such as Kyogre, Groudon, Suicune or Regirock. And the answer is YES!

Kyogre knows Surf and Thunder, and Groudon knows Earthquake and Solar Beam. All these moves are resisted by Zarude, which help it last longer in battle and fire off more charge moves. Thus, it compensates its “lack of offensive power” with its great TDO.

Furthermore, Sunny weather is pretty common in some regions of the world. A weather boosted Zarude will probably be the best non-shadow & non-mega raid counter under these circumstances.

In neutral conditions though, Pokémon such as Zekrom & shadow Raikou (vs. Kyogre), Mega Swampert/Blastoise/Gyarados (vs. Groudon) and shadow Metagross (vs. Regirock) will outperform it, along with Mega Venusaur (not by much) and Mega Sceptile (once it debuts in Pokémon GO), which are its Grass type direct competitors.

All in all, Zarude is an amazing Grass type attacker, so feel free to power it up once it comes out!

Jungle Healing is a non-damaging Grass type move that restores the HP of the user and its allies by 25% of their maximum HP, and heals any non-volatile status conditions they may have.

If it gets the Charm treatment, it might end up being a strong damaging move in Pokémon GO, which would make Zarude even better as long as Jungle Healing’s stats outperform those of Power Whip (provided JH ends up being a charge move).

And that’s it, trainers! Here’s the tl;dr of the article: