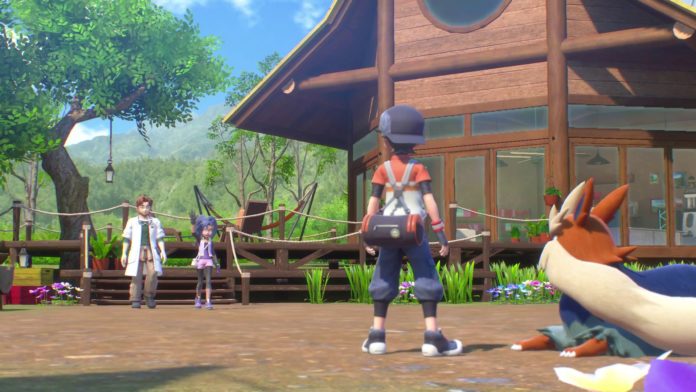 New Pokémon Snap is a previously announced video game in which players will take on the role of a budding Pokémon photographer in the Lental region. There they will work with Professor Mirror, the region’s expert, on an ecological survey to photograph Pokémon thriving in nature. The game will be available on April 30, 2021, on the Nintendo Switch family of systems.

Wild Pokémon thrive on the islands of the Lental region, where environments can differ greatly, making for a variety of habitats where different Pokémon expressions and behaviors can be observed. Players will be able to get their attention by playing a melody or throwing fluffruit.

They’ll also be able to use an Illumina orb (an invention of Professor Mirror’s) on Pokémon to witness something out of the ordinary. They can even use their camera to run scans, which can help them find hidden Pokémon or inspect their surroundings.

As players keep researching a course, their research level there will increase, and they may discover Pokémon acting in different ways. Trainers may even encounter Legendary Pokémon or Mythical Pokémon.

You can learn more about Pokémon Snap here.

The original games have been faithfully reproduced and colorfully revitalized for Nintendo Switch. The sense of scale of the towns and routes has been carefully preserved, and fans who played the original games will recognize many familiar places.

Pokémon Legends: Arceus was developed with the desire to deliver an experience infused with new action and RPG elements that go beyond the framework established thus far, while honoring the core gameplay of past Pokémon titles.

As Trainers explore the natural expanses in Pokémon Legends: Arceus, they’ll encounter Pokémon that call these grand vistas home. To catch wild Pokémon, players can study the Pokémon’s behaviours, sneak up to them, then throw Poké Balls. Players can also battle wild Pokémon with their ally Pokémon. By throwing the Poké Ball holding their ally Pokémon near a wild Pokémon, players will seamlessly enter battle. This new gameplay angle is intended to provide Trainers with an immersive experience.

Pokémon Legends: Arceus brings Trainers to the vast Sinnoh region as it existed in the past, long before the setting for Pokémon Diamond and Pokémon Pearl was established. Rich in nature and with Mount Coronet towering at its heart, this is a Sinnoh unlike anything Trainers have experienced before as they embark to create the region’s first Pokédex.

As they start off on their adventure, Trainers will be able to choose either Rowlet, Cyndaquil, or Oshawott as their first partner Pokémon. These three Pokémon arrived with a Pokémon Professor, who encountered them on research excursions to various regions.