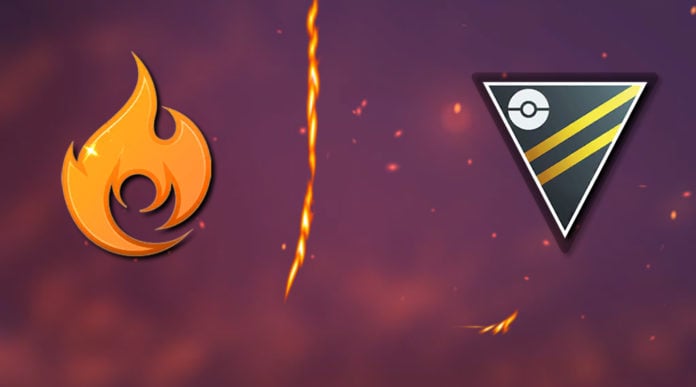 There are 12 Fire type Pokémon currently available in the game with a max CP over 2500. The more of them you have, the more options you’ll have and the more problematic you’ll be to your opponents. If you’re just a casual Pokemon GO PvP player you can use any of these Pokémon, but this article will still be helpful to you to find out what are the best attacks your Pokémon can have for PvP and to learn their weaknesses and resistances.

But if you “wanna be the very best, like no one ever was” you want to have the best Pokémon available. And as there is no best Pokémon in PvP, especially in Ultra League, you want to have as many options as possible. Tactic and strategy have a big role in PvP, but you can’t surprise your opponent if you’re using the same Pokémon over and over again.

Before we get in depth about all of the 12 Fire type Pokémon and the best fire type attacks, here is a quick infographic of the must have and not really necessary Fire type Pokemon in the Ultra League.

While talking about every Pokemon you’ll see it’s Effective stats for a CP just below 2500 in this case. Stats and it’s level largely depend on it’s IV. Read more about that in our article where we discuss should you care about IV in Ultra and Great league.

There are three Fire type Fast moves in the game. Fire Fang deals the most damage per turn, but Fire Spin charges energy so much faster and that’s the best Fire type fast move.

We can see right away see that Blast Burn is just superior to any other Fire type move for PvP. Not only does it require little energy, it has one of the best damage per energy in the game. You can compare Blast Burn to every other attack in our PvP Move Stats and Changes article.

Right below Blast Burn, in terms of damage per energy, we can find Overheat, but it’s flaw is that it need a lot energy to charge, and sometimes, in PvP, it’s so much better to have Charge attacks that require less energy, like Fire Punch, even though they don’t have the same DPE.

You really want to have Charizard with that legacy moveset from Community day as Blast Burn is one of the best PvP Charge moves currently in the game. Charizard has both the best Fire type Fast and Charge move in the game. Together with cheap second Charge move Dragon Claw that costs little energy and will counter every Dragon type Pokémon (e.g. Giratina) your opponent might use.

Only negative side of Charizard is that it’s really hard to find as Blast Burn is a legacy moveset, you either have it already or you need to trade for it. Also Charizard has double weakness to Rock so you have to be careful or you gonna lose really fast.

Typhlosion has the same stats as Charizard, but different typing. Only way you should consider using Typhlosion is if you have one with legacy move Blast Burn Fire. As we already mentioned, it’s the best Fire type move and one of the best moves in the game.

For Fast move you should go for Shadow Claw Ghost that will be able to deal super-effective damage to Pokemon like Cresselia, Lugia, Metagross, Mewtwo and Giratina, while charging your Blast Burn really quickly.

The Second Charge move, Solar Beam, is not that expensive so it’s a great one to have. Even though it’s not the best one, it can counter all of the Typhlosion weaknesses.

Even though the best fast move on Blaziken isn’t Fire type, we have to mention it as one of the best Fire type Pokémon, and the one we definitely recommend. Counter Fighting is currently the best Fast move for PvP in PokémonGO and you just have to use it.

Blaziken also has one of the best Attack stat out of all Fire type Pokémon when it comes to Ultra league and CP just below 2500. And it doesn’t lack in other stats either.

Only negative when it comes to Blaziken is that his Charge moves need a lot of energy to charge. Both attacks are pretty good, don’t get us wrong, but you might want to use Blaziken as your 2nd or 3rd option when opponent doesn’t have his shields anymore, so your energy doesn’t go to waste. Getting the second charge move is cheap, so you should definitely go for it.

Arcanine is one of the best Fire type Pokémon for Ultra League, and the one you should definitely have, because of his diversity with moves and pretty good stats with a lot of HP.

As a Fast move you can go both with Fire Fang Fire or Bite Dark, but none of them are really that good, it merely depends on what Pokémon you want to counter with your Fast move.
For Charge move we think you should go for Crunch Dark and Wild Charge Electric and not for Fire Blast Fire as it requires a lot of energy to charge and it’s not so much better then anything else. (you can use Flamethrower Fire if you have that legacy move on your Arcanine) Crunch will also help you counter Pokémon like Giratina, Mewtwo, etc. and with Wild Charge you’ll be able to counter almost every Water type Pokémon and some strong Flying types like Moltres, Charizard, etc.

With the moveset mentioned in the table you will be able to deal super-effective damage to 8 other Pokémon types. That puts Arcanine at the top of the list of Fire type Pokémon in Ultra League even without a Fire type Charge move.

Moltres has very similar stats to Charizard at just below 2500 CP and it has the same typing, both are Fire and Flying type Pokémon.

Both of them have the same Fast move Fire Spin Fire, but Charizard has much better Fire type Charge move. So the only reason why you would consider having a Moltres in your team over Charizard is if you have one with legacy move Sky Attack Flying. Also, Charizard is 10x cheaper in terms of stardust needed for second charge move.

But, if you have a Moltres with the legacy moveset and it was boosted when you caught it, you only need to power it up once and you’ll have a great Fire type Pokemon with a great Flying type attack.

Entei has the most HP out of all the Fire type Pokémon you can use in Ultra League. But lack of a great Charge moves prevents it from being elite. You can choose if you want a worse attack Flamethrower Fire that you’ll be able to use more often, or better attack Overheat Fire that requires 80 Energy to use. You can also pay a lot of stardust and candy to have both of the attacks.

Entei, like Moltres is only one power up away if you have one that was boosted, and it would be a great addition to your Ultra League team.

When we look at Heatran right away we see that it has so many resistances, so it will take less damage against 10 Pokémon types. But when it comes to dealing damage it just isn’t that good.

You have a choice of two Charge moves, where one, Fire Blast Fire, needs a lot of energy to charge, and even then it’s not that great. And the other attack, Iron Head Steel is just bad and it doesn’t deal a lot of damage. Also, as it is a Legendary Pokémon, getting a second charge move is extremely expensive.

But, after all of that, Heatran would perform pretty well in Ultra League against certain Pokémon or some less experienced players that don’t know how to counter it.

Magmortar is a pure Fire type Pokémon that has two Charge moves that don’t use a lot of energy. That means Magmortar would be a great Pokémon to start your battle and try to make your opponent use one or two Protect Shields. Even though it’s moves won’t deal a ton of damage as some others would, it will be annoying for your opponent and it might give you the edge you need.

Pro Tip: You can teach Magby the second charge move before evolving and that way you only need to pay 10000 Stardust and 25 Candy.

Best way to use Houndoom is to counter some Ghost and Psychic type Pokémon like Giratina and Mewtwo with it’s Dark type moves.

Foul Play Dark and Crunch Dark have the same stats for PvP so you can use either of them as your Charge move.

Ho-Oh has a weird choice for Fast Moves, where both attacks aren’t that great, but you should go with Extrasensory Psychic. It’s Charge moves also aren’t the best ones and it’s extremely expensive to get the second charge move.

You will be better off using Charizard or Moltres if you want a Fire and Flying type Pokémon.

Flareon has the lowest HP of all of this Pokémon and glass cannons won’t do well in PvP, and it doesn’t have anything going for it after that. Bad choice of Charge attacks make it even worse, and we didn’t even mention the price for that second charge move yet. You can pretty much use any other Fire type Pokémon rather then Flareon.