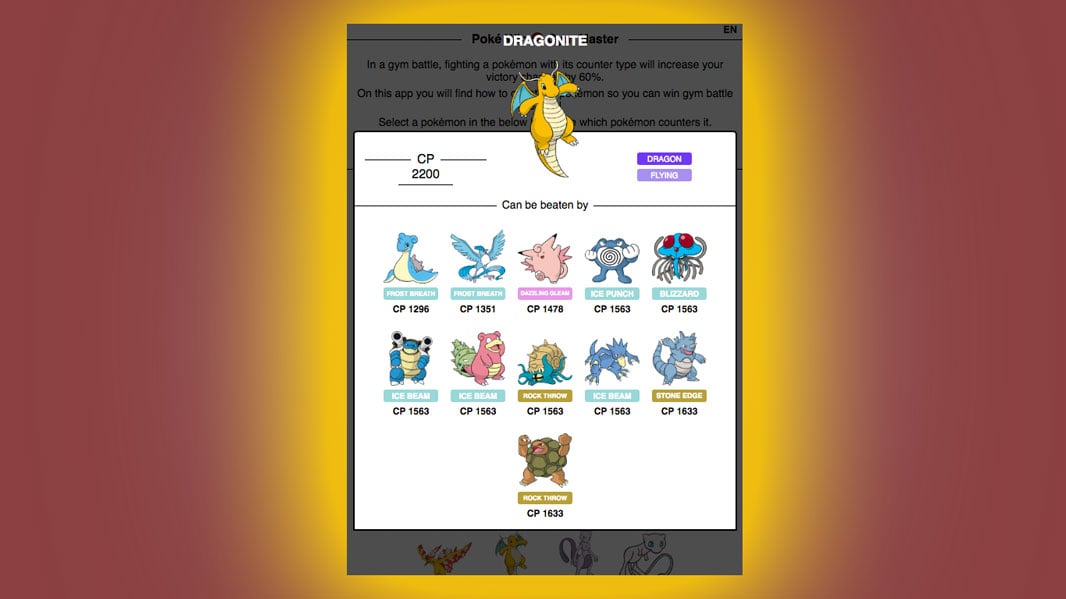 Pokewin is a super simple gym counters web app, originally developed by Shyrioon on /r/pokemongodev. We are so delighted by the simplicity and utilitarian nature of the web page that we decided to feature and review it on the Hub.

As the author states, fighting a Pokemon with it’s correct counter can increase your odds up by 60%. (Unless you’re up against Vaporeon, then it gets messy). To make the process of picking a counter and assembling your gym squad, Pokewin lists every possible “can be beaten by” option.

As far as we’re aware, the web app uses Types as preliminary filter and then applies additional math to figure out which Move is the optimal move.

We were also pleasantly surprised to see Combat Power estimates for counters. Just edit the target Pokemon’s CP and all of the counters will update their required CP.

Interestingly, all of the calculations behind the app check out. Even the counters that are weird on first sight check out after some clarification.

For example, there was a complaint on reddit that Fire types are listed as good counters for Lapras. The author replied with the following clarification:

“As far as I know, Lapras is a Water / Ice pokemon which makes it strong against fire (because of water, *0.8) and weak to fire (because of Ice, *1.25). Which in the end nullify to a x1. But (tell me if I’m wrong), Lapras only has ice moves (and 1 dragon maybe), which are not efficient against Fire, while a Fire pokemon might have Fire moves which will be “normal” to Lapras. Hence Lapras is theorically weak against fire.” – Shyrioon

Overall, great work, the web app works perfectly on mobile and on desktop. Thumbs up Shyrioon!