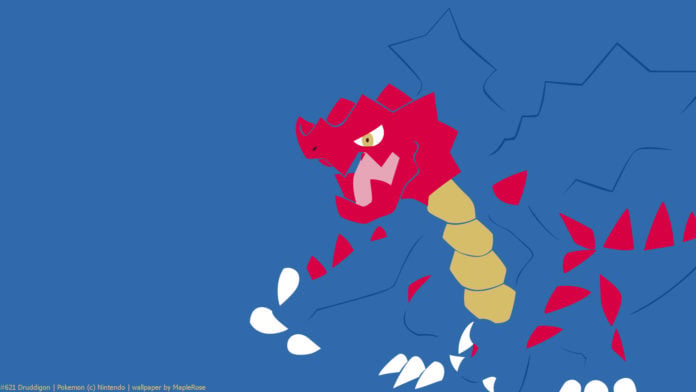 Remember those good ol’ days when a new Pokémon debuted in the game and it caused real hype? Better yet, remember that time when Gen 5 hit and Patrat, Lillipup and Klink debuted with their shiny?! The same happened with some other mons and the point is, it’s exciting to have a Pokémon debut with its shiny.

I’ll do you one more… remember August 2020 when we had the first-ever Dragon type event?

I bet that stroll down memory lane was nice but the icing on the cake is the fact that you can experience all of the cool stuff I just talked about in the December 2021 Dragonspiral Descent event!

Druddigon: the really cool, interesting but not so popular Dragon Pokémon that I absolutely love marks its debut in the game and you can bet that Pokémon Go trainers are psyched!

Its debut also coincides with its shiny release and call it what you want, this shiny is gorgeous! Just check it out:

Aesthetics and popularity aside, how does Druddigon fare in the meta? Does it leave an impact in any of the PvP leagues? Any chances in the PvE meta?

So read on as we spiral towards the draconic lair of Druddigon!

Druddigon is a pure Dragon type Pokémon and as such, is weak to the Dragon, Fairy and Ice types.

It’s always nice to come across a Dragon that doesn’t take 2x super-effective damage from Ice!

Its dual typing also grants its resistances that include:

So Druddigon resists all the starter types (if you account for Pikachu as well). That certainly is a nice niche to have as all those 4 types are quite prevalent in the lower PvP leagues.

But does it have the stats to give out a loud roar in those leagues? Let’s find out!

Druddigon has the following stats in Pokémon Go:

Druddigon has a starter-esque ATK coupled with average bulk. These stats aren’t likely to help Druddigon take flight in the PvE meta (welp, it doesn’t even fly actually. But those wings?!). However, Druddigon can surely work in the Great and Ultra Leagues!

Does it have the moves to deliver the GL & UL goods?

Druddigon, with its pure Dragon typing and access to Dragon Tail + Dragon Claw and Night Slash, appears to be a Fraxure clone. However, Druddigon hits a little harder and is appreciably bulkier than the virtually non-existent Fraxure in the meta. It is worth noting that Fraxure delivers a decent performance in both GL and UL

And Druddigon? We’ll find out soon!

There’s absolutely no reason to use Bite over Dragon Tail. Not only does Bite lack STAB, it just isn’t as dangerous as the buffed Dragon Tail, which is the most damaging fast move after Charm and Razor Leaf.

So all things said and done, Dragon Tail it is.

Once again, it’s a no-brainer. Hyper Beam is powerful alright but unlike a Pokémon like Sableye that doesn’t really have anything better as a 2nd charged move to boot, Druddigon has access to 2 very fine charged moves.

At only 35 energy and a workable 50 DMG, Dragon Claw and Night Slash are numerical clones of each other. Dragon Claw gains STAB while Night Slash has a 12.5% chance to boost your ATK by 2 stages. Yikes!

So what is Druddigon’s ideal moveset?

By the way, what’s with the Unovan dragons having a viable Dark type charged move as a second attack?! Druddigon and Haxorus with Night Slash, Reshiram and Zekrom with Crunch, and obviously Hyreigon with STAB stuff. Looks like Gen 5 Dragon types have embraced darkness as an old friend.

Being a pure Dragon type backed with cheap charged moves and a powerful fast move, Druddigon can actually make a dent in the armour of quite a few teams. With a lucky Night Slash boost, this dragon cosplaying melted crayons can actually be fearsome.

It won’t break the meta but it sure can scare it.

Druddigon registers a solid win percentage in the GL meta:

But just how crucial are these wins in nature? Let’s find out!

Druddigon has the following battle profile for (1-1) and (0-0) shield scenarios in the Great League:

Druggigon is certainly no core breaker in the Great League. That said, it does have some interesting wins. The rest of its wins come against non-meta mons owing to its largely unresisted dragon attacks.

Druddigon registers a pretty good win percentage in the UL meta. This dragon reaches level 40 at a CP of 2732. So there’s no way you’re bringing an XL Druddigon into the Ultra League.

Druddigon has the following battle profile for (1-1) and (0-0) shield scenarios in the Ultra League:

Druddigon delivers an impressive performance in the Ultra League despite giving a lower win percentage figure. Now, in Druddigon’s defense, this maxed out, non-XL dragon is facing off against many XL mons here. As such, it’s actually pretty good here, claiming its place as a worthy dragon. Once again, it’s not exactly shaking the meta but it still is doing good. Props to Druddigon for that!

With just a 213 ATK stat and a max CP at level 50 just above CP 3000, Druddigon is lost in the crowd of the several Dragon types dominating the meta.

So when it comes to PvE, there are just too many dragons surpassing it. Let’s hope that Druddigon gets a well-deserved evolution in a future generation!

Druddigon has a gorgeous shiny, a mostly disliked but interesting look and is a nice catch, to say the least. Yes, it looks like a Lego dragon designed by an unpaid intern on their first day but it still deserves some appreciation for being unique.

Druddigon does learn some cool moves like Shadow Claw, Incinerate, Aqua Tail and Power-Up Punch in the Main Series Games (it doesn’t learn Dragon Breath), and it can definitely get more interesting with any of those.

But until then, Druddigon is a niche pick in your GL and UL battles, performing quite well in the latter.

You can check out the Druddigon Raid Guide and a PvP Overview of the Dragonspiral Descent event.