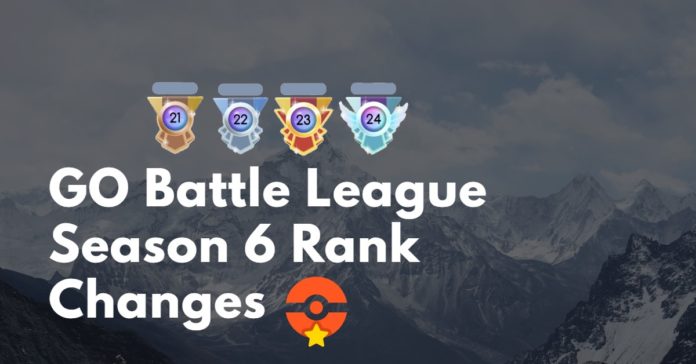 Season 6 of the GO Battle League is here and is bigger and better than any other season to date. Beginning on December 1st 2020, trainers will fight there way up the ranks as per usual but this time, things just got a whole lot more competitive.

As mentioned by the official announcement by Niantic, GO Battle League will now have a whopping 24 ranks instead of 10. Why the change you might ask, as of now, the current rating system can be flawed at times, with these changes, Niantic wants to have a smoother experience in the GO Battle League with a much more competitive feel to it.

“The GO Battle League will expand from 10 to 24 ranks, and the top four ranks will have all-new names and corresponding badges. The expanded ranks will be accompanied by a totally new reward structure, which gives Trainers more opportunities to earn exclusive rewards through ranking up.”

We can see by the above image that your rating will be displayed to others when you reach rank 20 instead of it being shown in the past at rank 7 onwards. We also now know what the final 4 ranks will look like and what rating you will need in order to achieve them.

As stated in the official announcement, ranks 21-24 have their own name and corresponding badge which differentiates themselves from the others. We now know that these last 4 ranks go by the following names.

These rank changes are exciting and are a much-needed change from it’s standard 1-10 ranking system. It will be a good way to separate the good from the best and is a step in the right direction for Pokémon GO PvP to become a possible eSport in the future.

The Pokémon you’ll encounter will be inspired by N’s seasonal teams in Pokémon Black Version and Pokémon White Version. Additionally, players who reach rank 20 can encounter the Legendary Pokémon that is available to battle in five-star raids at that time.

Pokémon that you’ll be guaranteed to encounter at each rank will now include the following Pokémon.

Double Stardust bonus from completing sets in GO Battle League will begin on December 28th through until January 4th. This will be a great way to gain some extra stardust, especially if you are working your way to levelling up to 44 which requires you to gain 100,000 stardust.

Pikachu Libre will return as a reward for trainers that make it all the way to the top and reach ‘Legend‘ rank of 3,000 rating. Alongside this, we now know that the featured pose for Season 6 comes from N (Natural Harmonia Gropius) from the main series Pokémon game Black and White.

It’s confirmed that after trainers reach rank 20, they have a chance of acquiring Legendary Pokémon that are available at that time which will be featured as a reward for winning battles.

In other huge news about this part of the announcement is that it has been confirmed that the 3 starter Pokémon from the Kalos region (Gen 6) will be obtainable as a reward for playing in the GO Battle League starting from Rank 16 to Rank 18.

Alongside these changes with the ranked system, Pokémon GO Seasons have been announced and correspond with GO Battle League.

“Starting on Tuesday, December 1, 2020, at 8:00 a.m. local time, the first Season will begin—the Season of Celebration! Pokémon originally discovered in the Kalos region will be appearing in Pokémon GO. To celebrate their arrival and the new year, Professor Willow is embarking on a quest to research the different regions of the Pokémon world, and he needs your help!

During this Season, Trainers will be able to participate in a series of in-game events featuring Pokémon first discovered in different regions. Whether you’re a fan of Kanto, Johto, Hoenn, Sinnoh, Unova, or Kalos, Pokémon originally discovered in each of these regions will be appearing as Professor Willow looks to discover and celebrate their rich histories.

At the end of the Season of Celebration, we’ll be introducing a brand-new global event experience. Stay tuned for more details!“

What’s this got to do with GO Battle League? well, GO Battle League seasons will occur in tandem with the overarching Seasons and will rotate formats on the same three-month schedule.

This means that instead of having a new GO Battle League season starting each month, it will now go for an entire “Season” which lasts 3 months, this marks Season 6 the start of GO Battle League’s first-ever 3-month rotation.

This gives players a fighting chance to make their way to the top rank of 24 and be able to have more time to adapt to the new meta and playstyle that season 6 has to offer.

If you’re looking to get into the highly competitive PvP scene that Pokémon GO has to offer, now is the best time. With such exciting changes right around the corner, we can only imagine the rewards and benefits for achieving such a high rank.

Niantic wants to continue to work and improve Pokémon GO PvP and ultimately make it into an official eSport ready mobile game, these changes are a great addition to the game that will help to fuel the fire in order to make it a reality. We can tell from Season 5 that they are experimenting with different cup formats in order to see what works and what doesn’t to better improve their game.

Will you be victorious and achieve rank 24 in GO Battle League? the journey won’t be easy, but by having mental strength and the right amount of dedication and knowledge, anything is possible.

Best of luck in Season 6, Trainers!