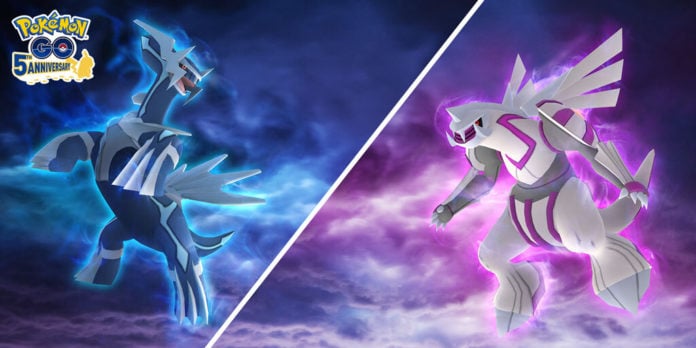 Coming this week in Pokémon GO, commencing 2nd August, we have an action packed week, including the Ultra Unlock and more!

After trainers complete a total of eight global challenges at Pokémon GO Fest, they’ll gain access to Ultra Unlock Part 1: Time. The flow of time will be disrupted! Pokémon from various eras will be appearing more often. Part 1: Time will run from Friday, July 23, 2021, at 10:00 a.m. to Tuesday, August 3, 2021, at 8:00 p.m. local time.

Dialga will feature in five star raids, and Shieldon and Cranidos are being released as shinies. Unown U will also feature in raids. Spawns will focus on the fossil Pokémon.

After Trainers complete a total of 16 global challenges at Pokemon GO Fest, they’ll gain access to Ultra Unlock Part 2: Space. As Part 1: Time wraps up, we’ll set our eyes to its other dimensional counterpart: space! Space itself will be distorted as Pokémon from various places appear!

Palkia and Heracross will have their shiny forms released and both will feature in raids. Regional exclusives will spawn in the wild, in raids, and feature in eggs, including both forms of Basculin and Shellos, and Kangaskhan.

Tuesday 3rd August 6pm till 7pm local time we have Magnemite as the featured Pokémon for spotlight hour, along with a 2x stardust bonus for catching Pokémon.

On Wednesday 4th July 6pm till 7pm local time we have Dialga Raid Hour. For more information on the best counters for Dialga check out our raid guide!

For a full list of the August Research tasks, including both the season, and permanent tasks, check out our article here.

Every Monday in August a 1 coin box is available for purchase in the shop, and will include one Remote Raid Pass, alongside other items.