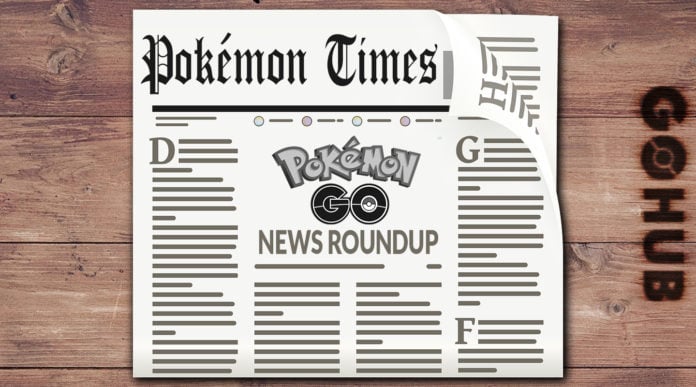 Pokémon Go’s event packed summer is going strong and shows no sign of slowing down! This week’s News Roundup has a lot to cover as many things have been announced, such as new research, shiny Pokémon, and raid bosses. Niantic also stated that they would be giving EMEA trainers additional opportunities to participate in Slakoth Community Day. 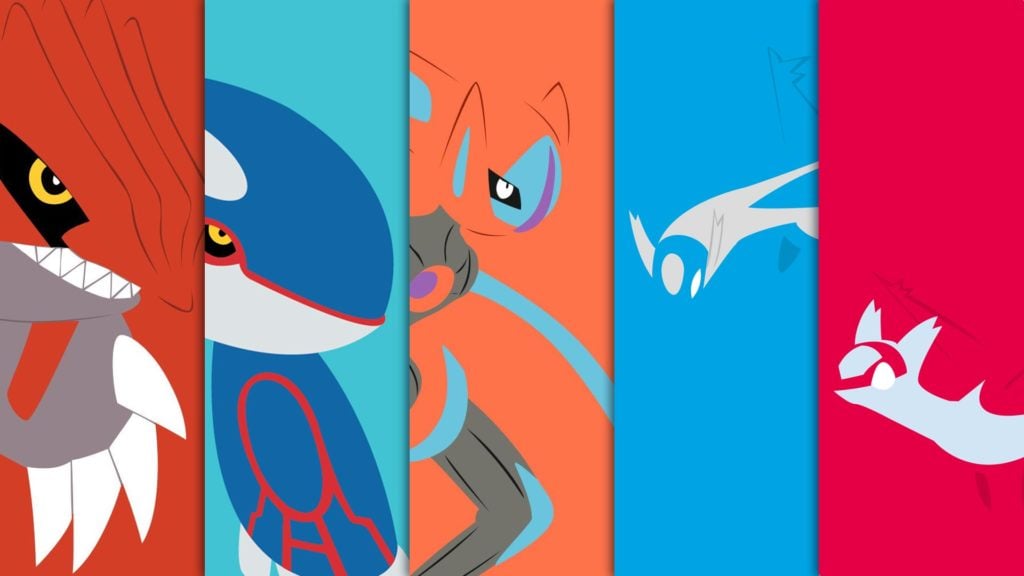 In July/August Research Breakthrough boxes, we bid Ho-oh and Lugia farewell, while welcoming two new legendary Pokémon, Groudon and Kyogre. This is their first time available in research boxes, and will attainable from July 1, 2019, at 1 p.m. PDT (GMT -7) until September 1, 2019 (GMT -7) along with Latias and Latios. The shiny variants will also be available.

Spinda will also be switching up in July with a new shiny variant to catch! 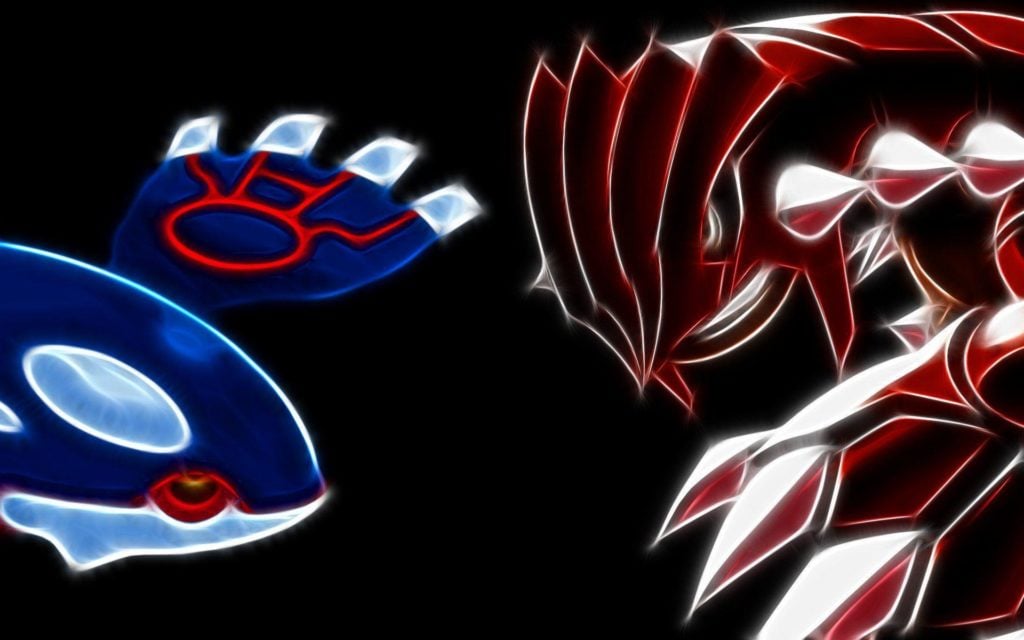 Raids have changed once again! This time, we see Groudon back in Tier-5 raids. Groudon will be available in raids from June 27th, 1 p.m. PDT (GMT -7) until July 6, 1 p.m. PDT (GMT -7) with the chance of encountering a shiny variant. Here is our Groudon Raid Guide to assist!

As for Ex Raids, we exchange Defense Forme Deoxys for Speed Forme. Trainers who receive Ex Raid Passes after June 23, 2019, 8 a.m. PDT will be able to encounter Speed Forme Deoxys.

After a period of silence on the matter, Niantic announced that they would be giving Trainers in the EMEA Region an additional chance at Slakoth Community Day. This is due to the region experiencing multiple issues that left most players unable to catch Slakoth during the available hours. From July 4th, 10 a.m. CEST to July 7th, 6 p.m. CEST, Slakoth will be spawning more frequently. When Vigoroth is evolved into Slaking, it will also learn the exclusive Community Day move, Body Slam. 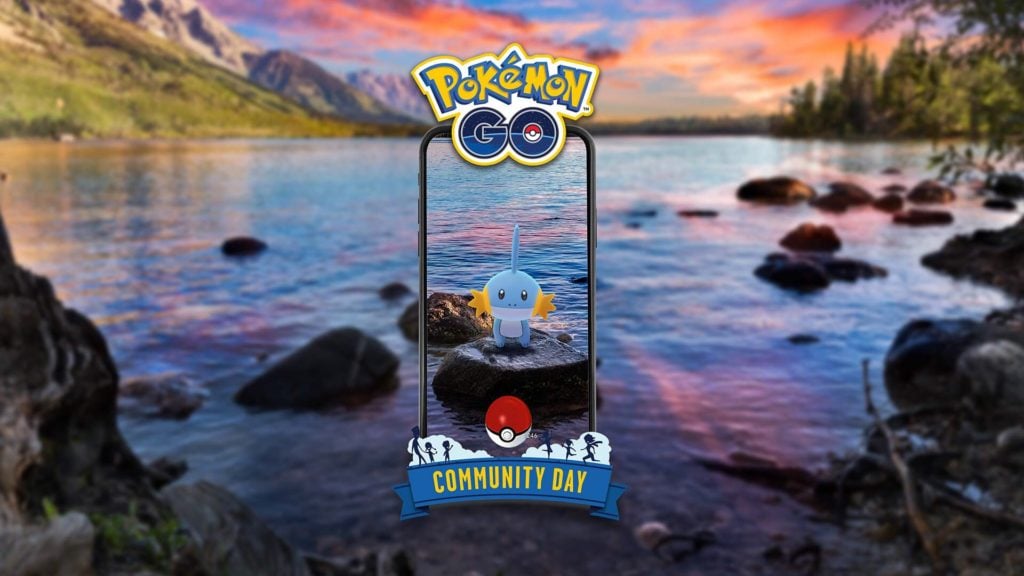 With a new month, comes a new Community Day! This month features Mudkip and will introduce the shiny variant as well. The exclusive Mudkip Community Day move is yet to be announced, but globally, will be available to catch and evolve on Sunday, July 21, 2019, from 4 p.m. to 7 p.m. your local time. Don’t skip Mudkip!

More details have been disclosed about this game from DeNa and the Pokémon Company’s partnership. This 3v3 battling strategy game is still planned for a Summer 2019 release, which means we will not be waiting much longer! The company which develops Pokémon Masters released a video showing footage highlighting the characters in the game along with their partner Pokémon in a very exciting opening scene. The rest of the video features in-game battles and cutscenes. 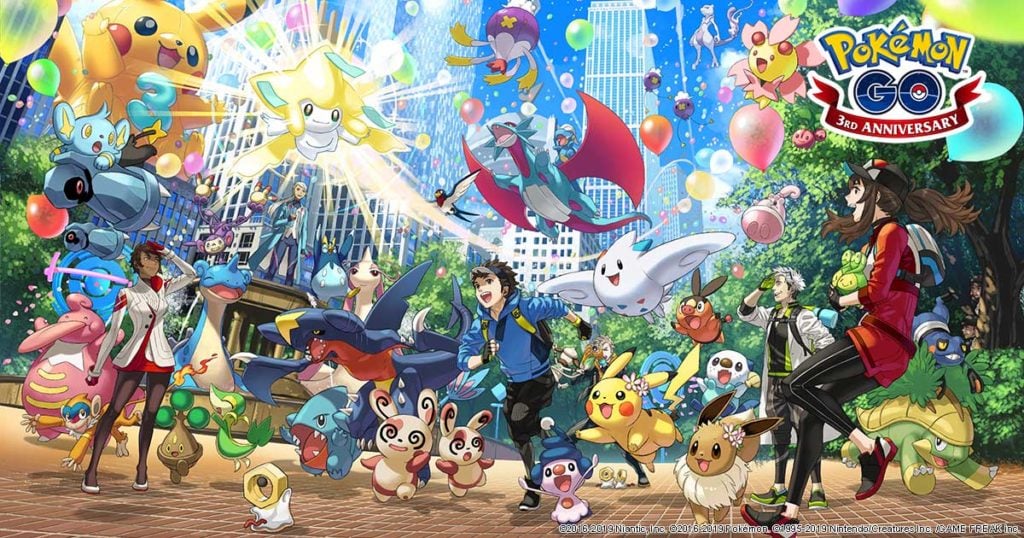 Pokémon Go turns 3! We are entering the third year of the game that brought us all together and keeps us coming back for more. Niantic has decided to go all out and introduce lots of goodies.

Party hat Pikachu family makes a return with Pichu being available in 7 km eggs. Pikachu will “Photobomb” during a Go Snapshot photo and spawn immediately after. Both of them have a chance of being shiny. These will be available from June 28, 2019, at 1 p.m. PDT to July 6, 2019, at 1 p.m. PDT

Speaking of shiny Pokémon, the remaining Alolan shiny variants have been introduced in-game. These Pokémon include:

These variants will stick around from here on out. Some can be found in the wild, and can also be hatched from eggs.

New avatar items have been permanently added to the shop. Customization items feature clothing worn by each of the team’s leaders, Spark, Candela, and Blanche.

Trainers will also notice a decreased stardust cost for all trades. From June 28, 2019, at 1p.m. PDT until September 2, 2019, at 1 p.m. PDT all trades will cost 1/4 less stardust. Within these same dates, you will also receive extra Premier Balls for raids, and be granted additional damage boost when you raid with friends.

Last, but not least in this 3-year celebration, is the new Jump-Start Research. This special research will only be available during summer and is geared towards anyone looking for additional experience and requires trainers to be at least level 10 to get started. It will help trainers become familiar with different game features and can be completed at any time, even after the event ends.

We conclude this News Roundup with the Raikou Raid Day. Thanks goes out to all the Trainers who came together to complete the challenges! This three-hour event took place on June 29, 2019, from 4 p.m. to 7 p.m. local times. This also brought upon the availability of the shiny variant as well. Niantic also did include 5 free raid passes for participating players.