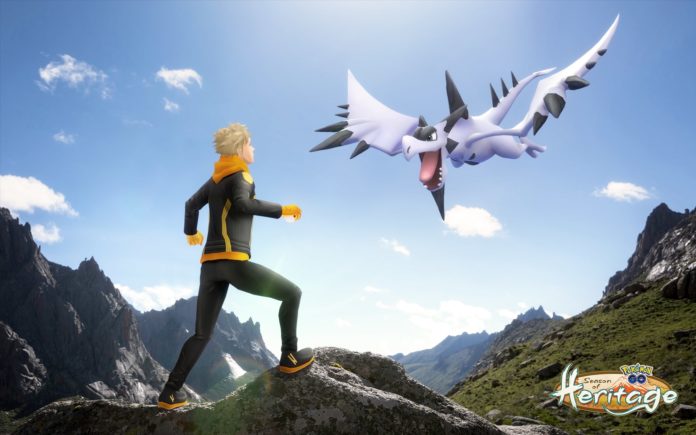 Mountains of Power is a Pokémon GO event that continues the story of Season of Heritage, starts on January 7, 2022 and lasts until January 13, 2022.

Mega Aerodactyl and shiny Slugma debut during the Mountains of Power event, alongside a selection of Rock and Steel Pokémon appearing in Raids, wild encounters and Timed Research.

Mountains of Power takes place during the Season of Heritage XP Challenge. Spark’s intuition leads him to believe that the mysterious door’s second mechanism requires the help of Rock- and Steel-type Pokémon to unlock it. Work with Spark to unlock the next mechanism!

Mountains of Power event bonuses include the following:

The following Pokémon will be appearing more frequently in the wild during Mountains of Power event:

If you’re lucky, you might encounter the following rare event spawns:

For the first time ever, Trainers will be able to encounter a shiny Slugma and evolve it into shiny Magcargo. Great League battlers, be on the look out for an influx of shiny Magcargo!

The following Pokémon will be commonly encountered from Field Research tasks during the event:

If you’re Lucky, you may find a Field Research Task that rewards an encounter with Mawile:

The following Pokémon will be available in Raids during the Mountains of Power event:

How to get a shiny Slugma?

Is Mega Aerodactyl a viable Pokémon?

Be sure to read our Mega Aerodactyl meta analysis for an in-depth answer. The short answer is yes.

Why is shiny Magcargo pink?

All amazing shiny Pokémon are pink.

Which Pokémon Raid guides are available?

The following Pokémon have specialized Raid guides on GO Hub: