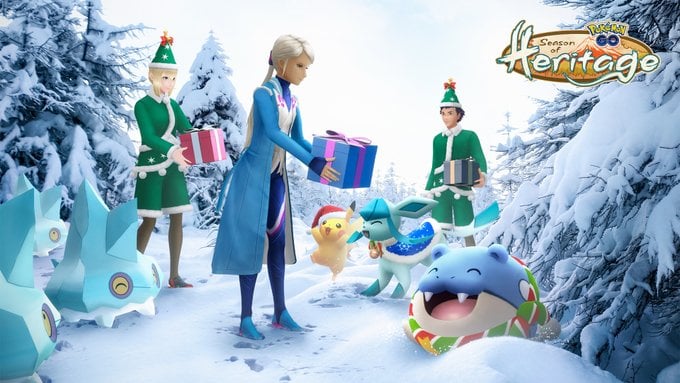 Coming this week in Pokémon GO, commencing 13th December we have the start of the Pokémon GO Holidays Event, the Holiday Cup in PvP, and the release of shiny Kyurem!

Pokémon GO Holidays 2021 last from December 16, 2021 to December 31, 2021, and the event is split into two parts. Bonuses are available during the entire Event unless stated otherwise. Shiny Spheal is being released!

The following Pokémon will be available to encounter in the wild.

Between December 13 and December 27 the following leagues will be featured:

**The following Pokémon are not allowed in GBL Season 10 Ultra League Remix:

***Pokémon must be at or below 1,500 CP to enter. Only Normal Grass Electric Ice Flying and Ghost type Pokémon are permitted.

Whenever a Trainer sends a gift, a postcard from that location is also attached based on the Pokéstop location that gift was from.  Or you can pin postcards from your own Gifts, by finding them in the Item Bag.

The Postcard Book feature will be released at the start of the Pokémon GO Holidays event.

Tuesday 14th December 6pm till 7pm local time we have Magmar as the featured Pokémon for spotlight hour, along with a 2x XP for evolving Pokémon.

Wednesday 15th December 6pm till 7pm local time Reshiram and Zekrom will be appearing in five-star raids. If you’re lucky, you might encounter a Shiny one!

Every Monday in December, a one-time-purchase bundle containing a Remote Raid Pass and other items will be available in the shop for 1 PokéCoin.

For the month of December you will receive 2× Stardust for first catch of each day.

For a full list of the December Research tasks, including both the season, and permanent tasks, check out our article here.