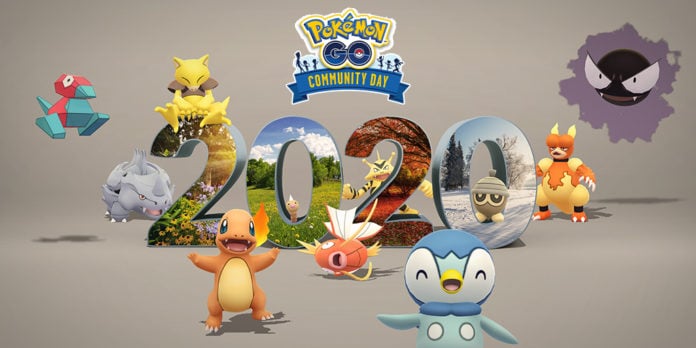 During this event, you will be able to evolve any of the featured Pokémon to gain their exclusive move, so be sure to check your storage now and organize what Pokémon you want to evolve!

We recommend marking them with something easy to find, for example, renaming them “commday” temporarily or tagging them on catch.

The Pokémon featured will all be available in their shiny forms at increased shiny rates, so if you missed out on any of these Community Days, this catch up style December event is the perfect time to get them!

In Raids and 2 km Eggs

It is important to note that any Pokémon from 2018 Community Days will not learn their Community Day exclusive moves. Niantic have teased that there will be other ways to teach these Pokémon their 2018 Community Day moves in 2021, so keep tuned to our social media to find out more as it is announced!

You can unlock this optional Special Research story with the purchase of an event ticket in the in-game Shop. The ticket costs $0.99 USD. 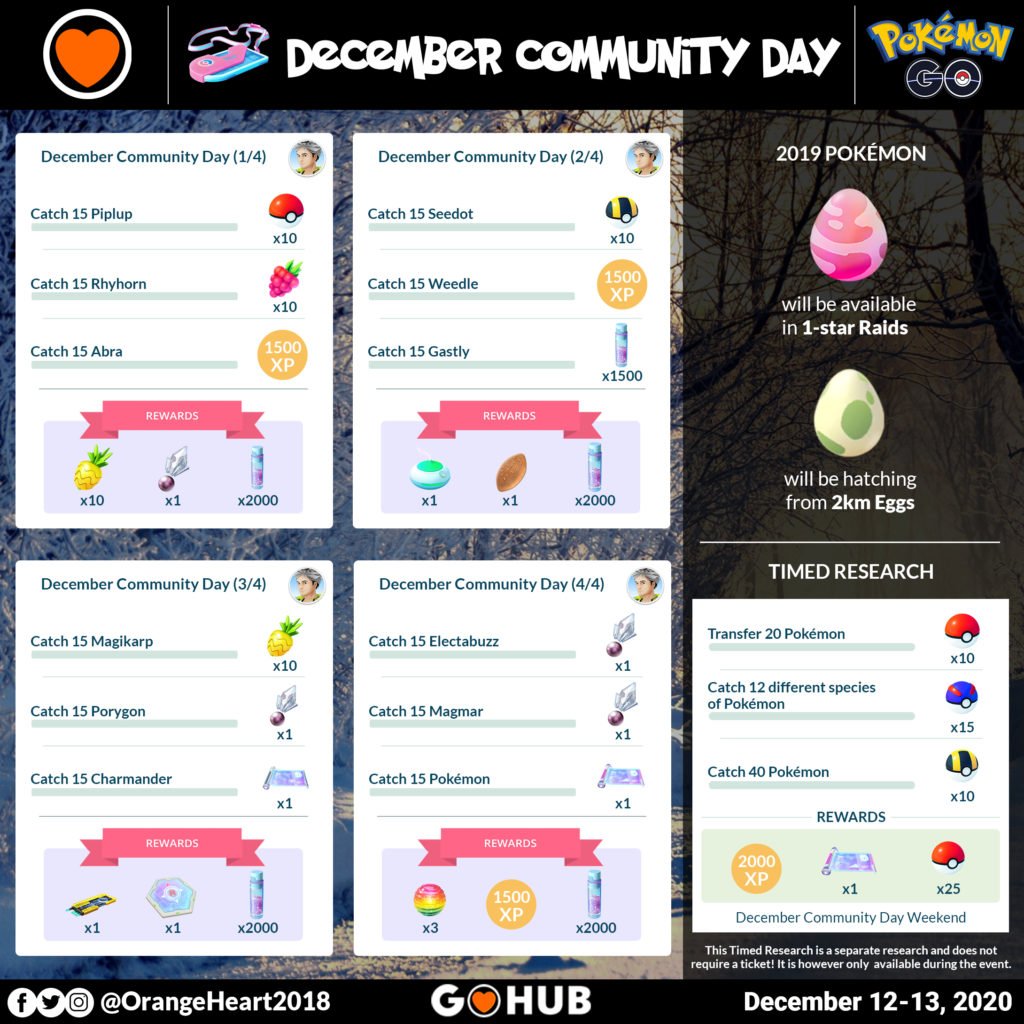 December Community Day 2020 Timed Research gives you a free Elite TM! Make sure to complete it during CD hours and check our Elite TM Tier List.

Rhyperior gains Rock Wrecker, a Rock type charge move that is a little on the slow side, but very hard hitting at 110 base power. It’s usefulness as a Rock type attacker has been discussed in great detail here. In terms of potential raid bosses, you can never go wrong with a solid team of rock types, and Rhyperior is an option that is a lot easier to access than many others. It is super effective against Fire Flying Bug and Ice types, making Rhyperior with Rock Wrecker a valuable addition to your raid teams.

Gaining Dragon type fast move Dragon Breath really helps Charizard make moves in Ultra League PVP.  It charges much quicker than all Charizards other previous fast moves, and makes it a top tier PVP battler, especially when combined with its other Community Day legacy moveset Blast Burn. You will have to use an Elite TM to gain access to Blast Burn, but you can get Dragon Breath during December Community Day.

Torterra is a Ground and Grass dual type, that gains access to Grass powerhouse move Frenzy Plant. Torterra is the only relevant grass type that resists Rock type damage thanks to that dual typing, and is a real tank of a Pokémon. Torterra works as a budget option for PVP, and our full analysis can be found here. Grotle is also a fantastic PVP choice for Great League, so keep an eye on those IVs.

Gyarados Water type move Aqua Tail is by far the preferable move for Gyarados in PVP, helping it gain a high ranking for both Ultra and Master League, both in their regular and Premier Cup forms. Gyarados is a classic for good reason, and who doesn’t want a shiny red one to flex in PVP?

As a duel Fire and Fighting type, Blast Burn gives Blaziken a better Fire move for PVP. It isn’t the best fire type for PVP, but it is a viable option, behind Charizard and Typhlosion. As a raider Blaziken is more of a glass cannon due to its defensive stats, but it is a great budget option if you don’t have access to the likes of Moltres.

While Slaking is well, pretty useless, Slakoth are still worth catching! Because this is going to be your best way to potentially gain a PVP IV Slakoth to evolve into Vigaroth, which is a brilliant pick in Great League.

Empoleon is a Water type that gets to shine in Ultra League, and to some extent Great League, thanks to gaining access to Hydro Cannon. For a full analysis we have an Empoleon Guide, and while not meta breaking, Empoleon is a PVP pick for this Community Day.

Mamoswine is another Pokémon that gained an exclusive move that didn’t really improve it. Mamoswine is an absolute beast of a Pokémon, but not with Ancient Power. We recommend catching all the Swinub you can and rerolling low IVs via trades, but save them to evolve outside of Community Day. For full details on what moves you want for Mamoswine for optimal raid power, check out our Mamoswine Guide.

Salamence lags behind a lot of the newer Dragon types, but is still a great option for some variety in your raid teams. We recently published a huge Salamence meta analysis, so be sure to check that out and prep those high IV Bagon for evolution. Shelgon has had some use in Great League themed cups, so a PVP IV spread Shelgon may be worth keeping hold of the future as well.

Haunter and Gengar both have viability in PVP, Gengar in Ultra League, and Haunter in Great League. Gaining Ghost type move Shadow Punch certainly improves Gengar in PVP, but does little to help in PVE. We have a comprehensive Gengar Guide that will help you pick what moveset you want. Haunter is a popular choice for Great League, check out our full analysis here.

Alakazam gains access to Fighting type move Counter. It works as a speedy quick move for PVP, but sadly Alakazam is so glassy it isn’t helping much. We have a huge indepth guide to Alakazam published recently. Usually I would rank Abra as a low tier priority because it isn’t the most meta relevant, but with the introduction of Mega Pokémon, everything changes. Mega Alakazam has a truly whopping 367 attack stat, the highest attack stat of all non-Legendary Mega Pokémon! Counter won’t do Mega Alakazam much good, but keep an eye out for those high IVs and depending on how Mega Zam works, an Elite TM for legacy move Psychic might be a good shout!

Similarly to Gardevoir, Gallade and Synchronoise aren’t the best combination. For PVP Close Combat and Leaf Blade are better optimised. It is still worth keeping an eye on those PVP potential IVs as Gallade has had some usage in themed Silph Cups, but keep it to evolve outside of Community Day instead.

Flygon sadly is a Pokémon that isn’t great even with a new exclusive move. It has some use in Great League, but Ground type move Earth Power is better suited to a second charge move, rather than being a priority if you haven’t unlocked the second move.

Infernape is a lower ranked Fire type, even with access to Blast Burn. Outranked by most of the other fire type starters, Infernape isn’t great for PVP or PVE, so don’t worry about it being a priority.

Shiftry gains access to Grass type fast move Bullet Seed, and makes its home in Ultra League. You need a perfect IV Shiftry for optimal usage in Ultra League, as it maxes out at 2186 CP, well under the 2500 CP limit for Ultra. Sadly, Bullet Seed is not the optimal move for PVP, Dark type fast Snarl charges much quicker, and time is always of the essence in PVP.

Beedrill learns Ground type move Drill Run, giving Beedrill some usage in Great League PVP. Beedrill also has a Mega Evolution, which packs a punch with a very high attack stat, so high IV Beedrill could have use for Mewtwo raids if it ever comes back to raids.

Porygon-Z gains access to Normal type attack Tri Attack, and sadly it doesn’t do much for the Virtual Pokémon. The most viable usage for Porygon-Z is in Master League, but it is outranked by many others, and will be destroyed by Master League faves Melmetal and Dialga.

Magmortar gained surprise access to Electric type move Thunderbolt in an attempt to make it more interesting for PVP, but sadly it still isn’t going to do a whole lot of good. Magmortar is outranked by many other Fire types in PVE, but it is a decent budget option if you don’t have access to Legendaries.

Gaining access to Fire type move Flamethrower was a surprise choice for Electivire, and it has some usage in PVP, but the reason Electivire makes the medium tier is because of how useful it is as an electric type attacker in raids and against Team GO Rocket grunts. For PVP Ice Punch is probably the better choice because of how powerful it is against popular choices like Togekiss. For PVE Wild Charge works best for raids, so don’t worry about evolving during Community Day hours, but keep an eye out on those good IVs for raids!

There are some clear priorities for this special December Community Day Weekend, so we recommend ensuring you have plenty of Pokémon storage space and Pinap Berries stocked up to ensure you can do the evolutions you want to do. Hoard Pokéballs if you plan to use a GO Plus or other similar device, and keep hold of as many Ultra Balls and Golden Raspberries that you can to catch those shinies quickly and effeciently.

Check through your storage now and ensure you mark any PVP/PVE IV Pokémon that you need to evolve during the Community Day hours, so that you aren’t trying to figure out which ones you want to evolve on the days themselves!